Questions about my Family and Witchcraft 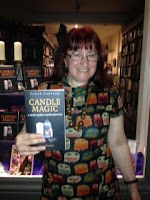 I'm back from my holidays, and although I still have more to blog about what I got up to, this morning I'm posting the answers I gave to interview questions I was emailed by a student at City University for a piece they are writing about witchcraft.

Q: What drew you into Wicca? Was it something that a relative introduced to you?

My grandmother was a Theosophist and worked as an astrologer. She met Gerald Gardner, the founder of modern Wicca, but didn’t approve of the nudity in Wicca and wasn't a Wiccan herself. My parents were very interested in the supernatural and ran a group called Enigmas, which explored the unexplained such as ghosts, UFOs, dowsing and the like. However, they weren't Wiccans either. I trained as a witch with Shan at House of the Goddess when I was in my 20s. I only later joined a Wiccan training coven because a friend was a member and said it was a good coven.

Although I am now a 2nd degree Gardnerian Wiccan – a high priestess – I would still only say that Wicca is part of what I do. I’m pretty eclectic and always have been.

Q: Is being a witch your full-time job?

It isn’t my job at all, it is a spiritual and magical path that I follow. I work as a writer and editor. I have written books on witchcraft though, including Pagan Portals – Candle Magic, published by Moon Books.

Q: Are you in a coven? What happens when you meet up with other witches?

I am not in an active coven at the moment. When I meet up with other witches we usually have a jolly good cackle about life in general.

Q: Have you faced adversity when telling people that you are a witch? If yes, why do you think this happened?

Nothing serious, but plenty of people take the piss a bit.

Q: What do you think is the most common misconception about modern-day witchcraft?

Probably that Wicca is ancient. Wicca isn’t ancient – it is a modern religion that has roots in ancient practices, but in itself was only created in the early 20th century.

Q: How do spells work?

Short answer – because all things are connected.

Q: What spell(s) are you asked to cast the most often?

Q: Do you often cast spells on yourself? If yes, what spells?

I cast spells to help with everyday things – anything from success in projects I’m working on to spells for finding things to spells for healing.

Q: Could you explain a spell (what ingredients or materials are used, what has to be said etc)?

I would point you to the spells section on my blog where you will find loads of examples to pick from: http://www.badwitch.co.uk/p/spellbook.html

Q: Have you ever seen a spell go wrong?

Not disastrously wrong, but spells don’t always work. They can nudge things in the right direction, but they aren’t miracles.

Q: With regards to the phrase “Do what you will but harm none”, where do you draw the line on what is harmful or not?

The Wiccan Rede is a guideline – 'rede' means guidance – it is not a law. Basically, I interpret it as a general ethical code not to be an arsehole.

Q: Do you believe TV shows and movies about witches have led to a skewed perception of witchcraft in pop culture?

Yes, of course they have. Most are over-sensationalist.

Q: How do you feel about representation of witches on Halloween?

It doesn’t bother me if people want to dress up as witches from horror movies or fairy tales.

Q:  What do you do on Halloween?

Halloween (or Samhain) is one of the eight modern pagan festivals celebrating the wheel of the year. It is a time to recognise that summer is over and that winter approaches. It is also a time to remember the dead.

Q: How have witches adapted to modern technology?

Much the same as everyone else. Witches are ordinary people. We use modern technology.

The photo shows me outside Treadwell's bookshop at the launch party of my book Pagan Portals - Candle Magic.
Posted by Badwitch at 08:05