Mogg Morgan: Apophis & the Mother of all Curses

I took notes during the talks at the Museum of Witchcraft and Magic’s conference on cursing earlier this month. I’ve finally found a bit of time to go through them and I’m going to summarise a few for my blog. Here is a precis of the first talk of the event - Mogg Morgan speaking about Apophis and the Mother of all Curses: Most of the magic in the world comes from Egypt – including curses. With the subject of the conference focusing on poppets as an important aspect of cursing, we have archaeological evidence of wax dolls used as curse images in Ancient Egypt. Other examples from the classical world are lead figures in coffins. The hands are tied on some and some have exaggerated genitals.

The Egyptian deity Apophis (also called Apep) was ‘the great nasty’ - the mother of all curses and also the mother of cursing techniques. It was normal to show Apep small, but he was actually a large snake. One technique of magic is to make things smaller – reduce them in size – because small things can’t be scary. Even in contemporary politics, making a small satirical image of leaders reduces their power.

Talking about something and naming it makes it powerful, but in Egyptian magic, mutilating the name took power away from it. One image depicted Apep with a flint knife cutting off a bit of a hieroglyph to reduce its power. Mutilation of images reduces its power and this continues in Coptic world and elsewhere.

Apep is a demonic energy. (Mogg said he wouldn’t call Apep a god as that is uncertain). Is there absolute evil? Or is it relative? Normally in ancient mythology, it is relative, but Apep bends that rule of ancient world as Apep represents absolute evil. 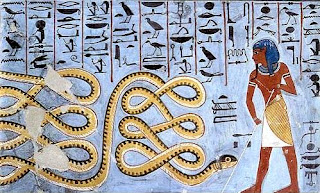 Image magic
It is possible to argue that the origins of magic relates to activity against Apep, the serpent of chaos.

Heka is the name of magic, to make magic, to replicate images. That is a good definition of magic. Pagans are very into images, it is definitive of paganism. In the Christian 10 commandments, the third commandment is, ‘Make no graven images.’ This was intended for Christians to distance themselves from Egyptians, who used a lot of images.

Circles and enclosures
One quality of defining magic - and cursing - is enclosing things. This could be seen like the magic circle in modern times. A temple does that, and building a square is more primeval than building a circle. The first thing the gods do when brought back to life in Egyptian myth is make a four-square building.

Spitting, licking and swallowing
These are archaic magical techniques. To spit upon something is easily understandable as magic and spitting on an image, for example, is a powerful action.

Binding and knots
These are ancient forms of magic from Egypt. In the Koran, the magician or exorcist is the blower of knots, to unravel them

The evil eye
One Egyptian image shows a wax ball being beaten. It represented the evil eye or ‘biting eye’, which is associated with snakes that were said to hypnotise victims. Beating a wax ball is magic to deflect the evil eye. 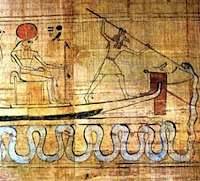 Few people could read in the Ancient Egyptian world so books had pictures in. For example, in The Book of the Dead you just need the picture images to see what will happen in the afterlife.One picture from the book shows the Sun God Ra just before dawn (the most dangerous moment) with a huge snake below being speared by Set.

But Apophis is never actually killed. If you kill the devil you have to invent them again! Where else would you channel your anger? You would have to project it onto something or someone else, or a group of people. Apophis is about non-existence.

Colossal serpents exist in most mythology. There is Leviathan from Canaanite myth for example.
In the first societal breakdown after Old Kingdom in Egypt, there was some sceptical writing – saying that the building of the pyramids was a waste of time as people did not come back from dead.
It was a bad time in which rival warlords were trying to kill each other. This is the first time Apep (or Apophis) is mentioned. Magic itself developed in this period for protection and had a primacy it never had before.

A huge Egyptian book is called The Book of Overthrowing Apep. In the temples they cursed Apep every day. The technique uses a wax image of Apep to be spat upon. Wax was important, because when it is finally destroyed there is nothing left. If there is anything left, the bad thing will come back
The image was spat upon at several times throughout the day, then placed in the fire and trampled in the dirt. The words: “Fire be upon you Apep,” were repeated four times.

Apep has no temples we know of, but could be the remnant of an archaic serpent cult.
Mogg again framed the question as to whether Apep represented absolute evil or or whether things are still relative. He summed up by saying that his name emerges in time of hardship when Egyptians resorted to magic to protect themselves and possibly even invented magic at that time.

The photo at the top shows Mogg Morgan at the conference, the other two pictures are public domain images of Apep/Apophis.