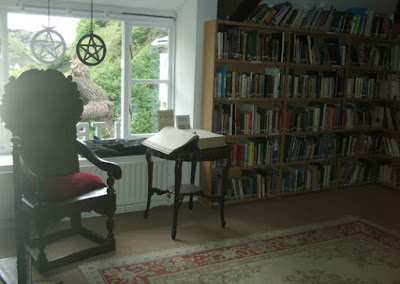 The latest issue of Mark Norman's Folklore Podcast is about a new play called Witch. It was written by Mark's wife, Tracey Norman, who is an actress and historian. In the episode, Mark interviews her about why she wrote the play and what it is about.

Tracey wrote Witch after researching English witch trial documents and depositions from the early modern period. The play is heavily based on one particular trial, but is not an attempt at exactly replicating it. Instead it transposes some of the material from that trial and from other witch trials into a conversation between three characters in a library, in which a magistrate decides whether the case should go to court.

The play was first performed in the library at the Museum of Witchcraft and Magic at Boscastle and is on tour around the west of England. There is also an audio recording that you can buy to download. You can hear an excerpt from that on the podcast.

On the Folklore Podcast website, Mark says: "This serves to give a voice to those people from our past who were denied one at the time, telling an important story. Tracey talks about her research, the play and the other projects which are coming out of this important work."

You can listen to the podcast for free here: http://www.thefolklorepodcast.com/ and you can follow the Witch project at www.traceynormanswitch.com