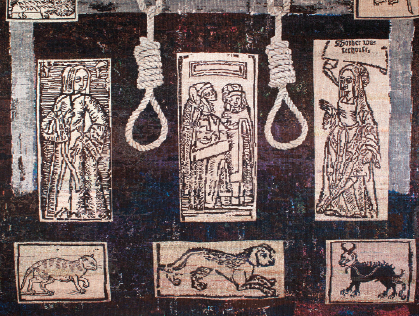 There's an exciting new exhibition and series of events about witchcraft taking place in Stroud, Gloucestershire, this autumn. Certaine Wytches: Fear, Myth and Magic is part of a long-term project by artist and researcher Anne Jackson.

It uses historical texts, original artwork and contemporary scientific and cultural references to explore the subject of women and witchcraft. The exhibition is free to visit and runs from Saturday 30 September to Sunday 5 November 2017 at the Museum in the Park, Stratford Park, Stratford Road, Stroud, Gloucestershire, GL5 4AF.

Here are the details about Certaine Wytches: Fear, Myth and Magic from the Museum in the Park website:


In Anne Jackson's current project, ‘The Witchcraft Series’, she presents a series of works exploring the history of witch persecution in Europe, and the metaphors which the idea of ‘witchcraft’ evoke in modern culture, through the medium of knotted tapestry.

Referencing sources from the earliest printed books warning against the evils of witches, to the repeal of the final Witchcraft Act in English law in 1957, the works explore the imagery and social attitudes that led to the trial and execution of thousands of people, mostly women, across Europe.

Jackson's large and small-scale tapestries often depict evidence given in individual witch-trials, including that of young children encouraged to testify against their mothers. Whenever possible, she reproduces the original printed texts from witch-hunting pamphlets and trial accounts as part of the tapestry composition, seeing this as a kind of ventriloquism, giving a voice to individuals from the distant past.

Several tapestries also utilise the metaphor of ‘witchcraft’ to reflect upon our sense of powerlessness in the face of current fears and concerns, such as climate change.

Anne Jackson has exhibited widely across Europe, the USA and in Australia. Her work is held in public collections, including the Art Endowment of the City of Aalborg, Denmark, the Geffreye Museum, London, and the Museum of Applied Art, Budapest, Hungary.

The Artist will be at the Museum on Friday 13 October, Wednesday 18 and 25 October, Saturday 28 October and 4 November between 2pm and 4pm. Call in to meet her and find out more about her work.

Supported by The Hartlebury Fund and weaversbazaar

Here are details of the talks and other events running alongside the exhibition:

I wish it was closer to home ...thank you & Blessed be