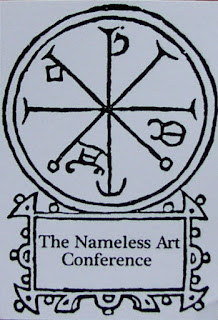 Andrew Collins, author of many books about mysterious phenomena, gave the introduction to The Nameless Arte conference on traditional witchcraft last weekend.

What he said I agree with – that witchcraft is in our blood and is not just about venerating god and goddess. It certainly can’t be learnt in one a single weekend course, whether or not that course gives you a certificate at the end saying you are a witch.

While I’ve got nothing against weekend courses – and shorter events for that matter – being a witch is more about what you do on a regular basis than what you might have learnt in a one-off class.

Being a witch is also more than just what spiritual or religious path you follow too. As Andrew said, witches should actually be able to communicate with spirits, do spells, scry and so on. He also suggested ways to do this.

He said it was important to remember the past and bring it into the present. Study the folk traditions of your part of the country. If you want to contact gods, goddesses and spirits, contact those of your area. Do meditations to connect with the local landscape over at least a month – probably much longer. Find out and research local traditions. Listen to your dreams. Your contact will get stronger over time.

The talks over the rest of the day showed examples of people who do all of those things. Michael Clarke spoke about traditional craft as a way of life; Martin Duffy talked about the graven image – the crafting and manipulation of effigies in British witchcraft; Richard Ward’s lecture was called Between God and the Devil, it was about the origins, history, evolution and preservation of folk magic in rural Essex; Andrew Mercer gave a talk on the subject of his forthcoming book called The Wicked Shall Decay, on charms, spells and incantations of rural Britain; the last talk of the day was by Gemma Gary on Cornwall and the modern traditional craft. 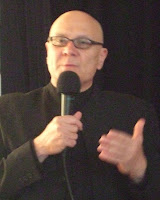 Finally, there was a question and answer panel session, in which Gemma said that among witches in the recent past there was a tendency for people to make up grand stories about lineages, but now we recognise much of our folk magic only dates back to 19th century. She hoped that in the future we will more recognise that we are all recreationists and reconstructionists. We will recognise that we have to make our own traditions.

Andrew built on what he said at the beginning – you cannot learn all about witchcraft from a weekend workshop or a single day's conference – but it is important to have more events like The Nameless Arte to share and pass on information. We can then all take away that experience, put it into practice and, in time, become better witches.

Over the next week or so I will be posting some of the other notes I took during the day's talks.

You can view Andrew Collins' books on Amazon and also view The Wicked Shall Decay on Amazon.