Festival of the Week: Today is World Smile Day 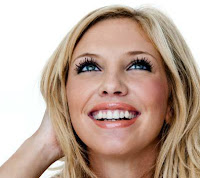 Today is World Smile Day - encouraging smiles to spread across the globe - and I've picked it for my Festival of the Week.

"A smile cost nothing, but gives much" is the first line in a popular poem by an unknown author - and it is true that being smiled at will make most of us feel happier.

In fact, a survey for Smile Day, found  that 63 per cent of people admitted that being smiled at brightens their day. To be honest, I'm surprised the number isn't higher. OK, maybe one doesn't want to be grinned at by the office creep, but at most times a smile makes me feel better.

However, I'm unsurprised that only 28 per cent of people in Britain said they attempt to smile at someone at least once a day. Having been travelling on commuter trains into London a lot recently, I've certainly seen a lot of very unsmiling people.

The research also showed that over half of us (52 per cent) smile most when we make others smile.

So go on - make an effort to smile at someone today. You might really cheer them up - and make yourself feel happier at the same time!

Note: The research was conducted for White Glo.