Day Out: Haunts and Ghosts of Brighton 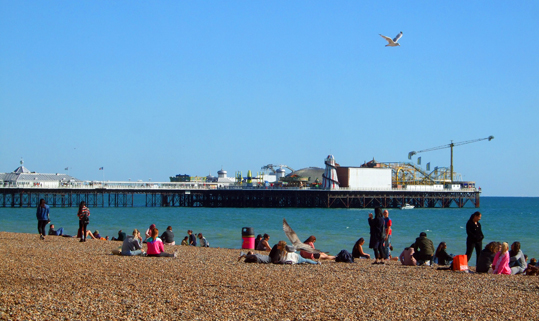 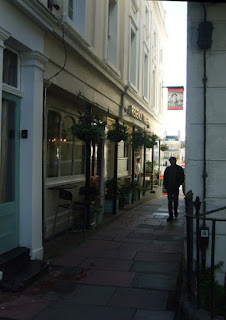 If you are going to Brighton for Witchfest International this weekend and have time to explore the delights of the town as well as the go to the biggest witches' conference in England, you could do a little ghost hunting while you wander.

I know the photo at the top showing Brighton's pier and people on the beach on a sunny day doesn't look too spooky. But apparently, on stormy nights or days around Samhain when the veil between the worlds is thin, the waters by this part of the Sussex coast are awash with ghost ships.

One of them is the Good Ship Nicholas, which was wrecked on the beach in 1100, killing all its passengers, who were pilgrims coming back from Jerusalem. The spectral ship is sometimes seen on moonlight nights when a southerly gale is blowing, according to the book Ghost Hunter Walks in Sussex, by Rupert Matthews.

Brighton beach is also haunted by a large dog with floppy ears that follows people walking along the shingle at dusk. I'd be wary if I saw that particular ghost though as spectral dogs are often warnings of death in traditional folklore.

The gloomy alleyway photographed to the right has the entrance to the Regency Tavern, which is much plusher on the inside than it looks on the outside. It is also home to two ghosts - a Victorian girl with a limp and a former pub landlady.

Everyone who visits Brighton has to explore The Lanes - a maze of narrow passageways that are home to the most amazing independent shops, cafes and pubs. Some of them are haunted too. Nile Street is frequented by the ghost of a hooded man, Fountain Court was the site of a murder in October 1936. The shade of the victim, Arthur Joyce, is still sometimes seen there. The Druid's Head pub has several ghosts - the most famous of which is a lady in red.

If you fancy doing a walk that covers these ghosts and some others, you can view Ghost Hunter Walks in Sussex on Amazon.

Witchfest itself is on at The Brighton Centre, King's Road, Brighton, BN1 2GR. It is organised by Children of Artemis and runs from 10am Saturday until the early hours of Sunday morning. There is also a Friday evening social event with entertainment. You can buy tickets here: https://www.eventbrite.co.uk/e/witchfest-international-2017-tickets-31394224972

Wow, how fascinating! I've visited Brighton a few times and had no idea about all this haunted history !

I had a rather strange encounter, not in Brighton but in the Hanglteton Manor, a very old pub on the very outskirts of the urban sprawl in Brighton and Hove. Out of nowhere I felt like I was being watched, then had a very strong mental image of a man sitting there in a red coat - I assume military from days gone by. I also had a similar experience in Preston Park when I visited for the Valiente exhibition. I walked in one room and in my mind's eye I 'saw' a man - then walked out of the room and found a painting which bore a close resemblance.

Preston Manor is haunted - I've blogged about the ghosts there in the past.