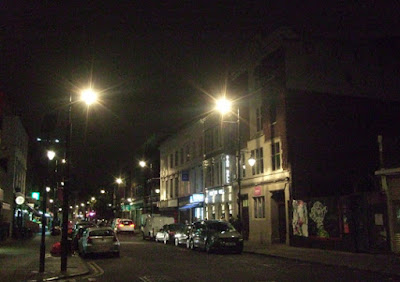 There's a brilliant new immersive horror performance on in Hoxton, London, at the moment. Go and see it if you possibly can. Or better still, go and see it twice - because every experience is guaranteed to be different.

The production is called Hammer House of Horror Live – The Soulless Ones and the adverts describe it as "the first immersive theatre show from the legendary Hammer Films".

Here is more of the description from the venue, Hoxton Hall's, website:


Meet Carmilla, Queen of the Vampires. Immerse yourself in a sensuous, sexy, spine tingling world. Witness the Hoxton Hive of Vampires attempt a bloody ritual that will allow them to appear in the daylight. Experience the unique atmosphere of The Hoxton Hall, one of London’s finest Victorian music halls. Move from dusty vaults, and bewitching opium dens, to bed chambers, and creaking attics. There’s 105 scenes to explore in two hours. Created by some of the most accomplished players in London’s thrilling immersive scene. No two people will have the same experience. But every experience will be unforgettable. The Soulless Ones, from Hammer House of Horror. Don’t dare go alone.

I've been to perambulatory and immersive theatre before - but nothing quite like this. In previous productions of this kind the audience will generally get to see all of the scenes - they might not see them quite in the same order, but they will see them.

In The Soulless Ones you get the chance to follow individual characters and see their story unfold. When I went I mainly followed the tale of a doomed romantic poet, but I could have followed the psychic, the doctor, the newly-created vampire, Carmilla herself or Laura, the vampire Carmilla created in the Gothic novella by Sheridan la Fanu, which predated Dracula by 26 years. (You can view Carmilla on Amazon.)

Having said that, whatever thread you follow, you won't miss the main plot. The audience is carefully drawn together for the pivotal scenes. The vital issues that have drawn the characters together - willingly or unwillingly - are also discussed by each of them before the finale.

And the audience is part of the play too - everyone is given a black cloak to wear and put in character at the very start. Having said that, you won't be required to act in the play - the audience's role is that of witness to an experiment.

Although tickets for the play aren't exactly cheap - £48.50 for Tuesday, Wednesday and Sunday nights, £52.50 for Thursday, Friday and Saturday - I am seriously thinking of going again.

The photos show the outside of Hoxton Hall, a poster for  The Soulless Ones and the front cover of the book Carmilla