Every Day Magic: The Start of Winter Festivities 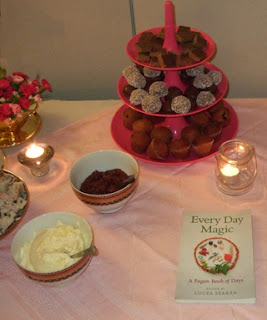 When I say it's time to start celebrating the winter festivities, you might be thinking I'm talking about Black Friday. But not exactly.

According to Every Day Magic - A Pagan Book of Days, which is celebrating its own official launch today, November 24 is the start of the festival of Brumalia.

Today's entry in the book says of Brumalia: "This Ancient Roman winter festival was similar to modern Christmas. The festival, which involved feasting, drinking and merrymaking, was in honour of Saturn, God of plenty, renewal and time, and Ceres, Goddess of agriculture. Bacchus, God of wine, was also honoured.

"The holiday started earlier and earlier over the years – much like modern Christmas celebrations. By the Byzantine era, it began on November 24th and lasted for a month until the return of the light at Saturnalia. Share a drink with friends, with the traditional blessing, ‘Vives annos’, or, ‘Live for years’."

Every Day Magic contains 366 spells, rituals, meditations, Pagan prayers, divinatory techniques, poems to read and recipes and craft projects to try out, along with the details of festivals that take place throughout the year. All the activities are intended to be easy to follow so you can pick up the book, open it to a day and find something you can do. 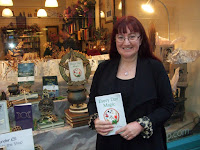 There are contributions from nearly 50 pagan authors and practitioners from many different traditions across the world, including Atlantis' Geraldine Beskin, best-selling pagan authors Ellen Evert Hopman, Melusine Draco, Harmonia Saille, Rachel Patterson, Caroline Wise, Elen Sentier and other Moon Books writers. I edited the book and also contributed some of the entries, including today's one about Brumalia.

You can order a copy of Every Day Magic from Amazon or buy it at The Atlantis Bookshop in London or at Treadwell's Bookshop.

The pictures on this post show me holding a copy of Every Day Magic outside The Atlantis Bookshop and a copy of the book surrounded by cakes at the launch party.