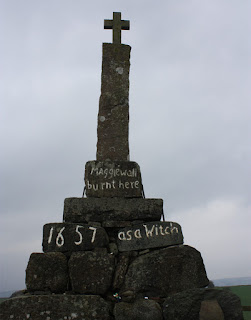 "Face of 'witch' who died before she could be burned for her 'crimes' is digitally reconstructed 300 years later" - story at Telegraph.co.uk: http://www.telegraph.co.uk/news/2017/10/31/face-witch-died-1704-digitally-reconstructed/

"These modern day witches practice 'magic' - but it's not what you think" - story at LincolnshireLive: http://www.lincolnshirelive.co.uk/news/local-news/two-modern-day-witches-practice-648733

"'She's making a foolish mistake': White Witch warns Angelina Jolie against using spells and 'tattoo binding' to woo back Brad - as she reveals a magic ritual for the lovelorn to find happiness" - story at the Daily Mail: http://www.dailymail.co.uk/femail/article-5032503/White-Witch-warns-Angelina-Jolie-against-using-spells.html

"Take a tour of a witchcraft museum in Cleveland" - story at WTXL ABC 2: https://www.wthr.com/article/house-tied-to-1692-salem-witch-trials-rises-from-near-ruin

Photo by Stephen Dickson, Wikimedia Commons
Posted by Badwitch at 08:21