International Women’s Day & the Goddess in Everyone 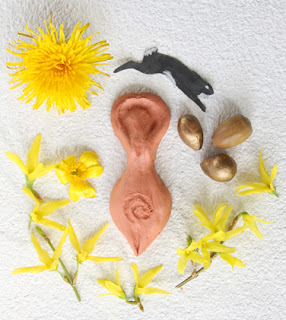 Today, March 8, is International Women’s Day. The annual event commemorates the movement for women's rights and each year has a different theme. In 2018 the theme is #PressforProgress, recognising a strong global momentum striving for gender parity.

There is already good gender parity in paganism in general. Partly this is helped because we honour goddesses as much as gods - and it is important to recognise that everyone has a little of the Goddess in them. The witch is also a strong female archetype, although men can be witches too.

Here is the entry for International Women’s Day in Every Day Magic - A Pagan Book of Days:


A time to reflect on femaleness. Women may be half the world’s population, but they are not yet standing as equals in authority, wealth or leadership. Today imagine the Goddess in everywoman showing her strength to the world. Reflect on the progress made, not the gaps and goals. Find your own female Self (men and women) and be unapologetic. Praise her hard work. Honor her perseverance. Celebrate her creativity. Then find a woman important to you and do the same for her.

Every Day Magic contains entries for each day of the year, with contributions from about 50 pagan writers. The entry for March 8 was written by Dorothy Abrams, co-founder of the Web PATH Center, a Pagan church and teaching centre in New York, USA. She is also the author of Identity and the Quartered Circle: Studies in Applied Wicca and a contributing writer for Naming the Goddess and The Goddess in America.

The photo shows a goddess figurine I sculpted from clay for a mandala last March.