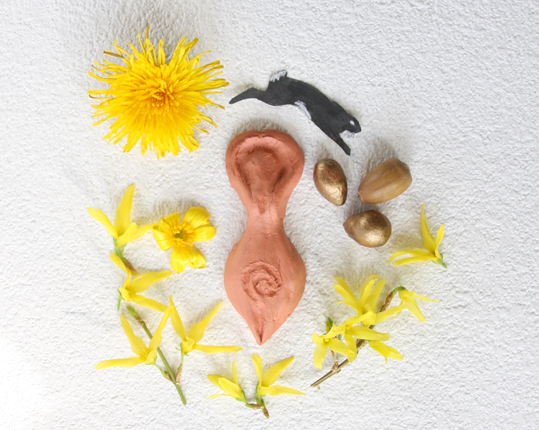 Here is my mandala for the month of March, showing flowers from my garden, a goddess figurine and eggs that I made from air-drying clay, and a hare painted on paper.

One of my new year resolutions for 2017 was to create a mandala each month to show the changing seasons and including things from my own garden. I was inspired to do that after I created a mandala for the front cover of a book I edited last year - Every Day Magic: A Pagan Book of Days. That mandala used natural and found items, jewellery and trinkets that held a personal meaning for me.

I enjoyed making that mandala and it helped me explore the cycle of the seasons in a personal way, both from exploring my own garden in a search for suitable things for the craft project and thinking about what the Wheel of the Year actually means to me.

The flowers in my March mandala are forsythia from the bush in my front garden, the first dandelion I spotted and a lesser celandine flower. These are all beautiful yellow spring blossoms and for me seem to typify the plants coming to life at this time of year. I also have lots of daffodils in bloom at the moment. I was tempted to include one, but I had already used an early dwarf daffodil in February.

Eggs and hares are also very much associated with March, both for pagans and Christians. Two of the little eggs in my mandala are made from clay, but one is actually an acorn from last autumn. These symbolise the potential seeds of new life.

I painted the hare from an old photograph of a dead animal that I saw online. I coloured it mostly black. March is a month of death as well as the start of spring. In times gone by it would have been one of the most difficult months for people who lived by the land. The food reserves from the previous year's harvest would have been almost used up and very few new edible things were yet ready to be picked. That dandelion would probably have gratefully ended up in a salad rather than a picture.

Personally for me, March is also the month when my mother died. Although she was old, it was still a shock and even though several years have gone by since then I still miss her - especially at this time of year.

However, I designed the mandala as a circle, centred around a figure representing the Goddess of life, death and rebirth. Death is necessary so that the cycle of life can continue and in my mandala the spirit of the hare descends towards the eggs and seed that contain the essence of life. So the seasons turn.

Note: The photograph is copyright Lucya Starza. If you reuse it, please credit www.badwitch.co.uk. My inspiration for the goddess figurine came from similar clay figures I saw on Pinterest.