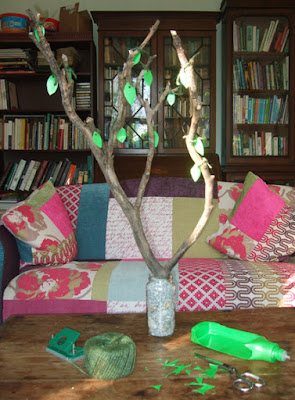 This is an upcycling project in progress - but I'm not entirely sure where it's going.

It all began when I went on a woodland walk and picked up an interesting dead branch that had fallen from a tree. I took it home as I felt sure I was going to do something with it, even though I wasn't sure what.

Later I thought I might make it into a twig tree to hang things from, so I put it in an old glass jar weighted down with pebbles. I hadn't yet decided what I was going to hang from it though.

Then I learnt that the theme for Earth Day 2018 was reducing the number of plastic bottles going into landfill. That gave me the idea of cutting leaf shapes out of a green bottle and tying them to it.

I did have an old green plastic bottle sitting under the kitchen sink. It had been there for years with just a tiny bit of cleaning product left in the bottom. There was just enough in it to get my toilet all sparkly and clean. When it was empty, I rinsed it out, cut out leaf shapes, punched holes in them and tied them to the branch.

I think I'm going to put the tree on my altar for Beltane. I've got some ideas for a ritual that could involve it too. I'll blog more about that later.

But, while I'm on the subjects of tying things to trees and the environment, do remember that fixing plastic to living trees outdoors isn't a great idea. It can damage them as it doesn't decompose and restricts growth. Plastic can also be harmful to wildlife that tries to eat it. So, while it is fine to make an indoor ornament from upcycled bottles, do be thoughtful outdoors.