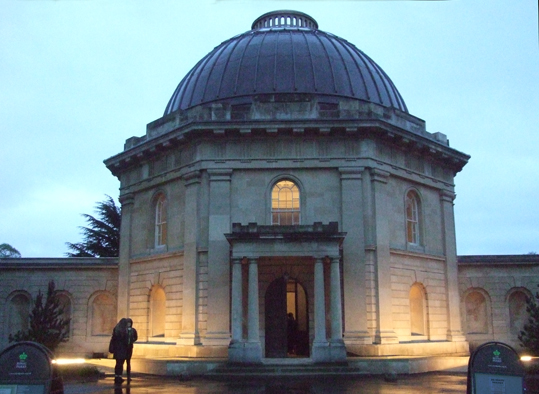 I took this photo at Brompton Cemetery yesterday evening after a search for ectoplasm in its newly restored chapel.

To be a bit more accurate, I didn't take part in a practical experiment in material manifestations of spirit - although that would have been very exciting. Shannon Taggart, who has spent the past 17 years doing exactly that kind of thing, gave a fascinating talk called Seance: Spiritualist Ritual and the Search for Ectoplasm.

She illustrated her presentation with slides showing historic photographs of mediums producing ectoplasm and modern images taken by herself. She explained that although most mediums these days communicate with spirits in a way that doesn't involve them turning up physically, there are still some practitioners who do claim to manifest material such as ectoplasm. She had even managed to photograph some of them demonstrating their skills.

The talk was at Brompton Cemetery Chapel in Kensington, and was the first event in the London Esoteric weekend of talks, workshops and entertainment involving the strange and unexplained. It is organised by Antique Beat and you can find the full programme here: https://antiquebeat.co.uk/events/london-esoteric
Posted by Badwitch at 09:14