Sunshine and Showers in my Local Park 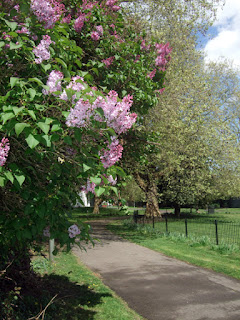 This was a view in my local park yesterday - beautiful and sunny, with the lilac in bloom and a few little white fluffy clouds in a blue sky.

It wasn't like that just a short while earlier - the sky was grey and torrential rain was falling, but it was just as beautiful in its own way.

My route to the shops takes me through the park, along that path you can see in the photo. It is only a few minutes' walk from my house, but it had started to rain between me leaving home and reaching the park.

I wasn't in much of a hurry, so I gratefully took shelter under the leafy branches of a large horse chestnut tree. Its cover kept me completely dry and it was nice to just stand there, watching the rain fall and listening to its gentle pitter-patter on the ground while birds sang in the branches above.

The shower only lasted five or ten minutes. At first, while I waited, no one else was in the park and it was very peaceful.

Two other people entered the park while I stood there though. Both were hurrying along as fast as they could and getting soaked. The first was a youngish man who looked at me as though I was very strange, standing under my tree. The other was an older woman with a shopping trolley, who smiled at me and told me I was sensible to have got out of the rain. She didn't come and join me though - she struggled onwards, by the moment getting wetter and wetter along with her shopping.

Maybe both of them needed to get somewhere for a deadline. Or maybe they didn't, but just couldn't bring themselves to stop, step off the path, stand beneath a tree and wait for the sunshine after the shower.

I made my way to the shops after the rain stopped. The day was glorious by the time I walked back through the park, but I halted there once again - this time to smell the lilac and take that photo.
Posted by Badwitch at 08:00