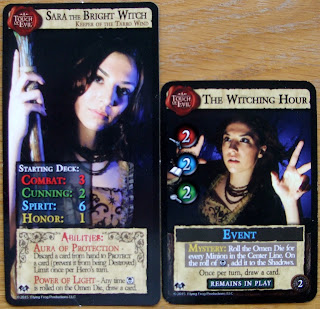 I'm continuing my look at how witches are portrayed in games with Colonial Horror - a standalone expansion for Dark Gothic, which I blogged about earlier this month.

My hubby treated me to a copy because I really enjoyed playing the original with him over the recent wet bank holiday weekend.

They are both co-operative card games with a horror theme. Colonial Horror's cards can be added to the earlier game, but it can also be played on its own. Unlike Dark Gothic, Colonial Horror does have a witch - and a good witch too!

Sara the Bright Witch is a character you can play. She has two special abilities: Power of Light, which lets you draw a card whenever a skull symbol is rolled on the game's special dice, and Aura of Protection, which lets you stop cards from being destroyed.

Naturally I wanted to play Sara as my character when we tried out the game last Sunday. I'd say she is quite powerful and has useful abilities. Being able to protect cards is one of several new rules that make this game a bit more advanced than the original, but still compatible with it. 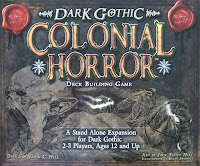 There is a second witchy card in the deck - The Witching Hour. This has good and bad effects in that when it first turns up it can help the monsters, but it also helps any player who then gains the card for themselves.

So, overall, Colonial Horror offers a positive view of witches and is also fun to play if you are into board and card games. The rules aren't particularly complicated, so this would also be good to try if you interested in all things witchy, but aren't a serious hobby boardgamer.