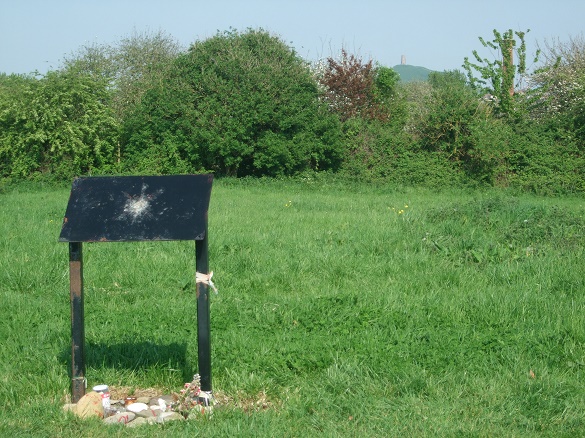 This is a picture of Bride’s Mound, a small hill to the west of Glastonbury, which according to legend once had a healing well nearby.

While Chalice Well and the White Spring are today famous sacred sites, Bride’s Well might once have been just as well known.

According to The Friends of Bride’s Mound, archaeological evidence suggests the site was used in ancient times. A dig discovered skeletons that were dated to the 5th century. Anglo-Saxons later constructed a chapel there, which remained in use until the dissolution of the monasteries.

Nowadays, however, the site is one of Glastonbury’s hidden secrets. There isn’t much to see except a field with a mound containing some well-worn sign boards and a few offerings left on the top of the mound. However, it is a peaceful spot, perfect for quiet contemplation away from the hustle and bustle of most of Glastonbury on a sunny day.

The Friends of Bride’s Mound wants to conserve the site and needs donations to help with the work. The website is www.friendsofbridesmound.com

I took the photo above so that you can see the plaque and offerings on the bottom left and the Tor in the distance at the top to the right.
Posted by Badwitch at 08:33