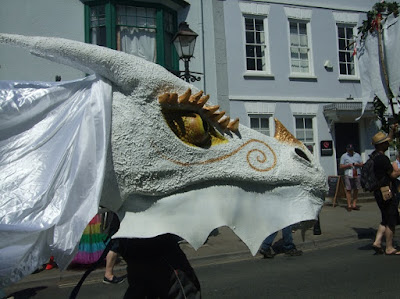 I think I’ve just been to the best Beltane celebration of my life. It had a glorious ritual outdoors in perfect weather at an ancient sacred site, a May fair in an orchard in the ruins of an abbey and it had battling dragons. There was food and drink, and music and dancing too. What more could you want?

I was at the Glastonbury Dragon Festival yesterday, which I actually only found out about after I’d booked to stay in Glastonbury for the May Bank Holiday weekend. The fair ran all day in the grounds of Glastonbury Abbey and had a good selection of stalls selling handcrafted items, home-baked food and the like.

Around midday there was drumming, Morris dancing and poetry recitals in the town itself. This was followed by the entrance of the dragons – although it couldn’t happen until they had gathered enough volunteers to be the dragons’ legs. The whole festival was very much a community event, put on by enthusiastic volunteers including members of the public being asked to come forwards to help bring the dragons to life on the day. 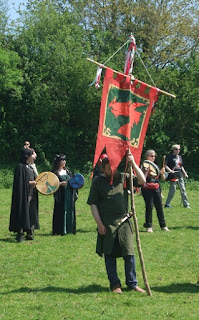 There were two dragons – the white dragon of winter and the red dragon of summer – which fought in front of the abbey gates before processing through the town and up the hill to the White Spring.

This was followed by a Beltane ritual in the field below the Tor. After that, people could return to the fair, where there was music to listen to while sitting in the dappled shade of the trees.

There were several things I liked about this celebration. The glorious weather and perfect setting obviously helped, as no doubt did the delicious cider I enjoyed at a pub after lunch, but what I really liked most were the dragons.

Now, huge battling dragons are pretty entertaining at any time of the year, but I like the use of them at Beltane to represent the end of winter and the start of summer.

Many pagans enact the battle of the Oak King and Holly King at the summer and winter solstices. However, I’ve never felt very comfortable about the symbolic reign of summer being handed over to winter at the time of year when the sun is strongest, or the defeat of winter when winter’s coldest months are still to come. Far better to do it at the time of year when the seasonal weather really changes.

A story told during the Dragon Festival ritual gave a mythological explanation of why the two dragons battle at Beltane – and then again at Samhain – with the appropriate dragon gaining supremacy at the suitable time of year. Again, I’m not totally sure the story was very traditional, but that doesn’t matter to me. It felt right.

I learnt that this was the third year the Dragon Festival had taken place in Glastonbury. I do hope it continues and goes from strength to strength.

The dragons are set to make a Samhain appearance on November 3 2018. This is the website for the recent Dragon Festival: https://glastonburydragons.co.uk/ 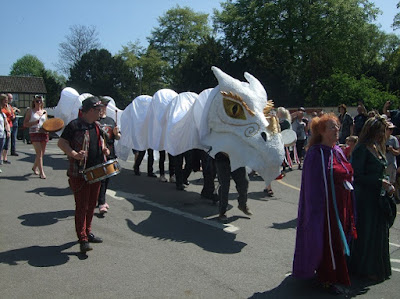 I know the creator of the dragons well - a skilled blacksmith and artisan. You should check out his FB page at cunning-artes ..... Beltane and Samhain, the dragons appear in Glastonbury!

Thank you! I'll have a look.

Great review, I hope you come back for Beltane 2019. You might be interested in my blog about life in Glastonbury at www.normalforglastonbury.uk Best wishes Vicki