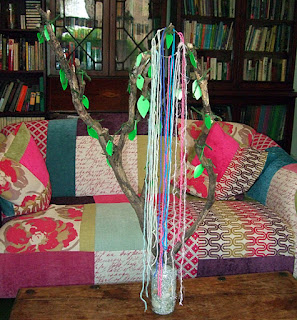 What do you think of my twig tree, which I decorated for Beltane?

It was a craft project that started with me picking up a fallen branch on a woodland walk. I put it in an old glass jar filled with pebbles and tied on green leaves cut from an upcycled plastic bottle.

Then, for Beltane, I decided I wanted to decorate it. You can just see it sitting on my altar for my Beltane ritual in my earlier blog post.

My idea was partly inspired by Maypole ribbons, but also by the clouties traditionally tied at some sacred wells and springs. Clouties were once tiny bits of natural cloth used in healing magic. The idea was that if you were unwell you visited a special spring or well where you tore off a tiny strip from your clothing, dipped it in the water and then tied it to a nearby tree. As the natural fabric rotted away, your illness would be healed.

This concept so caught the imaginations of pagans and others that a lot of sacred sites are now overly cluttered with ribbons and other adornments left by visitors. Often the things left are made of plastic or other artificial fibres and so will not decompose. There are so many of them that they can cause a hazard to wildlife and even damage trees.

Volunteers spend a lot of time removing them and really it is better if people don't leave them in the first place unless it is at a site that specifically allows them, such as Crossbones graveyard in London (pictured right). At most sacred sites they are not encouraged these days.

However, I have to admit I rather like the visual effect of trees dressed with coloured ribbons and streamers. So, I thought I could create my own artwork in my own home to enjoy for as long as I wanted, without littering public areas. I simply tied leftover lengths of coloured wool to an old bangle and hung it from the top of my twig tree to create the effect in the picture at the top.

You could use that idea to make tree decorations to use at sacred sites outdoors, then take away with you afterwards. Instead of a bangle, you could make a loop of ivy or honeysuckle and hang wool or ribbons to that. Use them while you are there - then it is easy to remove the hoop dressed with ribbons from the tree before you leave. You can hang them up again in your own home and enjoy them for as long as you like.

But please, at sacred sites, don't leave behind anything you brought with you unless you are specifically given permission to do so. Take your belongings home with you and leave the place tidy.