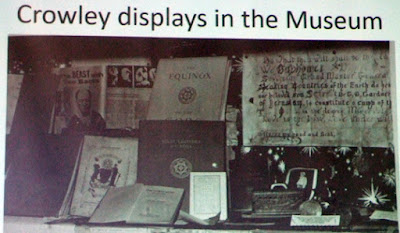 Ritual magic is a huge subject. It is the focus of an exhibition at the Museum of Witchcraft and Magic in Boscastle at the moment and was also the topic for the museum’s conference last weekend.

At the conference, museum co-manager Judith Hewitt talked about how she narrowed such a wide area by looking at the museum's earlier displays. 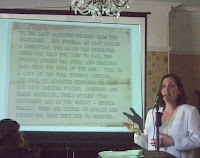 She said the exhibition was originally going to be quite general, but she then decided to concentrate on Aleister Crowley, his predecessors and his legacy. This was because it emerged that museum founder Cecil Williamson was enthusiastic about Crowley and had put on several displays of his objects.

Gerald Yorke, who was Crowley’s chief disciple at the end of his life and who packed up his stuff after his death, exchanged many letters with Cecil Williamson. The museum archive also contains lots of correspondence and objects to do with Kenneth Grant, Crowley’s successor in his order, the OTO. Steffi Grant, his wife, was an artist who designed several displays and created pictures to go with them.

The museum once had a magician’s room, which was a full-scale construction of a Crowley-style temple designed by Steffi Grant. A guide book for the room was written, but not published. It contained a history of the Hermetic Order of the Golden Dawn, which Crowley once belonged to, as well as explaining what the Crowley-based symbols meant. 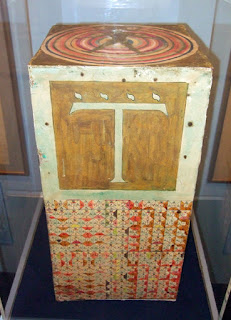 Sadly, many of the fittings for the room are no longer in the museum. One of the missing items is a double cubic altar made to Crowley's instructions. It was designed by Steffi and sent to Cecil in sections. The museum still has a smaller model of the altar, which is in the exhibition (pictured left).

There is documentary evidence that Cecil used the altar in the way described in Crowley’s writing. However, he also used it in his own way. There is a photo of him breathing life into a poppet on the altar, which is traditional witchcraft rather than ceremonial magic.

Judith said the museum would very much like to know what happened to the full-size altar from the magician’s room when it was on the Isle of Man, as well as other items from the collection that got lost in transit. These include several candlesticks that once surrounded a ritual magic circle.

I would add that the current exhibition, which is called The Dew of Heaven: Objects of Ritual Magic, isn’t entirely about Aleister Crowley. Although it does concentrate on aspects of ritual magic that influenced Crowley and that he in turn influenced, it also looks at alchemy and the possible connections between various folk magic practices and ceremonial magic.