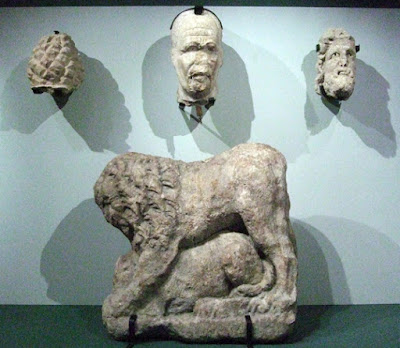 Halloween is normally when I blog under the London Necropolis heading, but death doesn't always fit to a neat schedule. In Roman London, it seems it came all too fast for far too many.

A number of the items on display at Roman Dead exhibition at the Museum of London Docklands came from the graves of children. Those who died when young were sometimes buried with toys or figurines, while jewellery and miniatures vessels were often put with the bodies of girls from wealthy families.

That little figurine of a smiling boy in the picture to the right was found among Roman bones discovered when Liverpool Station was being built in 1872. It might have been a representation of the child who died or intended as a companion for them in the afterlife. On display in the same cabinet was the torso of a tiny ivory doll. It could have been a favourite toy, but items like this were sometimes made as offerings to the gods when girls died before they were married.

The two Venus figures to the left were found next to a child's lead coffin, where they had been placed at the time of the burial. As well as being the goddess of love, Venus was linked to health and protection.

In the centre of the photograph at the bottom is a jet pendant carved with a Medusa. That was also found as grave goods and was probably also intended as a protective item. Jewellery depicting the snake-headed gorgon was believed to ward off the evil eye.

I first saw that particular pendant when I went on a tour of the magical items in the Museum of London archives a couple of years ago. I had been hoping to get another glimpse of it in this exhibition.

Overall, I found Roman Dead fascinating and I learnt a lot about our ancestors' burial customs and religious beliefs about death and the afterlife. However, I also found the exhibition distressing because there were so many actual human remains on show.

Before about 100 AD, the Romans tended to cremate their dead. There were numerous pots of cremated bone on display. Later, burial became more common. The centre of the exhibition space is set out with rows of skeletons in glass-topped cases.

I do understand that archaeologists and scientists need to study bones that are excavated if we are to learn more about how people lived and died in the ancient world. I also realise that most of the archaeological digs in London are preserving items that would otherwise be destroyed by building construction. However, I also feel that human remains - however old - should be treated as respectfully as possible.

At Roman Dead, I felt uncomfortable. I wanted to honour these ancestors of place rather than just stare at them. I wanted to know some appropriate words to say out of respect. I wanted, perhaps, to be able to behave according to the customs they would have been familiar with in their times.

In the end, I was pleased to leave the exhibition and walk outside into the summer sunshine.

Although I learnt a lot about Roman beliefs and burial rites, I was left with many unanswered questions in my own head about how in the 21st century we should deal with the bones of the ancient dead.

What are your thoughts? 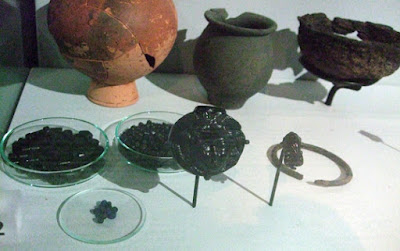