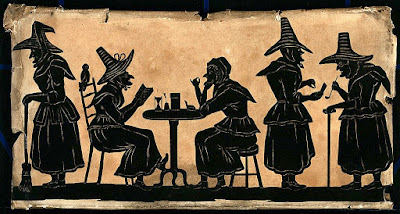 It has been a few weeks since I last did a round-up of news relating to witchcraft. I'm catching up - so here is a rather long list of links to stories about witches past, present and fictional:

"The Wizard of Oz and a brief history of the witch hat" - story at Syfy Wire: https://www.syfy.com/syfywire/the-wizard-of-oz-and-a-brief-history-of-the-witch-hat

"Beyond the Stereotypes – What is Witchcraft?" - interview with a traditional witch at Sputnik International: https://sputniknews.com/radio_brave_new_world/201808101067105953-beyond-the-stereotypes-what-is-witchcraft/

"How a small Fife town became a 'hotbed of witch-finding and punishing'" - story about a historical witch hunt, at The Scotsman: https://www.scotsman.com/lifestyle/how-a-small-fife-town-became-a-hotbed-of-witch-finding-and-punishing-1-4781993

"Concern over witch-hunting" - story about modern witch hunts, at The Telegraph India: https://www.telegraphindia.com/states/odisha/concern-over-witch-hunting-250965

"Known as the Black Witches of Salem, these women caused massive hysteria in a US town in the 1690s" = story bout Black history, at Face2Face Africa https://face2faceafrica.com/article/known-as-the-black-witches-of-salem-these-women-caused-massive-hysteria-in-a-u-s-town-in-the-1690s

"A Halifax 'school of witchcraft' guides people on their spiritual paths" - story at CBC.ca: https://www.cbc.ca/news/canada/nova-scotia/neighbourhood-witch-school-of-witchcraft-classes-magic-alternative-spiritualities-1.4767357

"The magical roots of feminism on film" - story at Syfy Wire-: https://www.syfy.com/syfywire/the-magical-roots-of-feminism-on-film

Picture: Witches: five silhouetted figures. The file comes from Wellcome Images, a website operated by Wellcome Trust, a global charitable foundation based in the United Kingdom. Refer to Wellcome blog post
Posted by Badwitch at 08:00