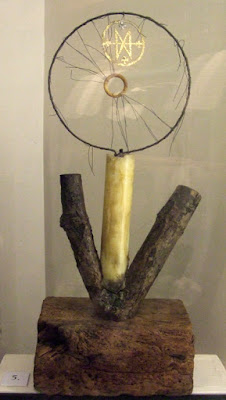 This candle in a forked branch on a wooden block backed by a wire disc is on display in the Museum of Witchcraft and Magic in Cornwall. It is thought to come from the collection of Charles Wade at Snowshill Manor.

Charles Wade was an eccentric collector of unusual items, with which he filled his manor house in the Cotsolds. At the very top of the house was found a secret "witch's garret" painted with occult symbols and full of items related to magic.

After Charles' death, Cecil Williamson was allowed to take some of the items for the Museum of Witchcraft - although the garret itself still has the occult decor and can sometimes be visited.

According to the MWM:


Charles Wade's inventory of the 'Witches' Garret' included a drawing of the candle and holder and the following information:
"Secrets merveilleux de la magie naturelle et cabalistique du Petit Albert. Published at Cologne in 1722. 'You must have a big candle composed of human tallow and it must be fixed into a forked piece of hazel-wood. Then if this candle, being lighted in a subterranean place, sparkles brightly with a good deal of noise it is a sign that there is treasure in that place, and the nearer you approach the treasure then the more will the candle sparkle, going out at length when you are quite close. You must have other candles in lanterns so as not to be left in the dark.'"

I'm not sure if the candle in the museum is made of human tallow. I certainly hope not - and to be honest in looks more like a paraffin wax candle that's been stained to look like tallow. Oddly, there is apparently a second description of the device in the museum's records, written by Cecil Williamson. It says something quite different:


This strange arrangement of a candle set in the fork of tree wood with a circular wire ring cris-crosses with wire thread so as to create a cobweb like structure was made and used by a witch living at Okehampton who, like the biblical witch of Endor, made a big thing of calling up the spirits of the dead and conversing with them. To that end she prowled the graveyards at the dead of night, where when the conditions were judged to be right she set up her spirit trap, making use of the old west country belief that night flying moths were the spirits of the dead...Hilda's spirit trap was discovered several years after her death concealed in a surface tomb with a loose side panel.

If the candleholder is a spirit trap rather than an treasure-finding device, I guess it doesn't matter so much what the candle is made of.

I took the photograph of the device (shown at the top of this page) when I was at the MWM conference and exhibition on ritual magic.

I'm always fascinated by candle lore as candle magic is one of my specialities (the picture to the left shows my own book on the subject). Mind you, I have no intention whatsoever of making any candles out of human tallow, even if it is a bit tempting to try to find hidden treasure!