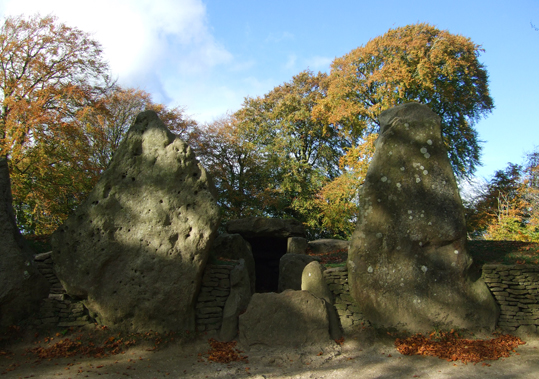 Before visiting Avebury at the weekend, I went to Wayland's Smithy, which is about 12 miles from the ancient stone circle. I'd been meaning to go to Wayland's Smithy for years - and in fact nearly visited back in 2015, but the weather was so bad I gave up after climbing Dragon Hill and going up to the Uffington White Horse in thick fog.

This time, the weather was dry and sunny. I was lucky though - earlier it had been tipping with rain and it rained again later. But while I was there it was a perfect autumn day, as you can see in the photo above. 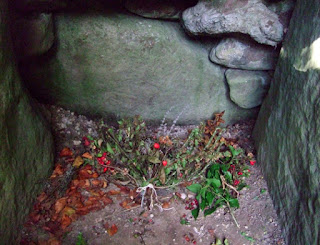 Wayland's Smithy is a Neolithic long barrow and chamber tomb close to the Ridgeway on the Berkshire Downs. Fourteen people were originally interred there and archaeologists have found that ceremonies were held in ancient times to honour the dead.

However, in more recent centuries the burial site became associated with the Anglo-Saxon god Wayland the Smith. Wayland's story is told in the 13th century Icelandic poem Völundarkvida and he is also mentioned in the tale of Beowulf. According to folklore, if you leave a horse at Wayland's Smithy along with coins, then go away for a while, the horse will be reshoed by the time you return.

I didn't see any horses or coins left at Wayland's Smithy when I was there, but I did see an offering of a bunch of foraged leaves and berries inside the tomb. Even though berries are biodegradable and are food for wildlife, I think it would have been better for the environment to leave them outside on the grass rather than inside the barrow. Nevertheless, they did look appropriate for a Samhain offering to the ancient dead of this sacred site. Our ancestors of place are remembered still.

Wayland's Smithy is managed by English Heritage. It is near Ashbury, SN6 8NX, and is a mile walk from the White Horse car park.

I went to see the white horse at Uffington many, many years ago and then walked, barefoot in the pouring rain over the hills to Wayland's Smithy. Lol I dislike walking barefeet yet somehow I felt that wearing my hiking boots to way would not be respectful. At Wayland's Smithy, I crawled inside the barrow (probably the same place these offerings were left) and marvelled at the spiral engravings in the rocks. I left a tiny silver offering in one of the little alcoves. I miss the UK (I'm in Canada now) and love reading your blog. If I recall correctly, you work near London Tower - I used to work at St. Katherine's Dock.

What an amazing story! I have a lot of respect for you walking there on foot, but it is a magical place. I used to work near St Katherine's Dock on a financial publication. Now I am doing an MA at Greenwich University, just over the river.