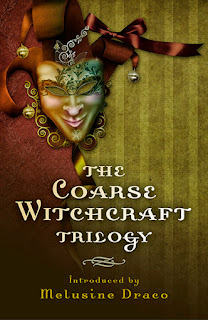 I’ve often said that Coarse Witchcraft is like Marmite … you either love it or hate it. Fans of the Coarse Witchcraft series are aware of the story behind the trilogy. How the authors were unhappy with the proposed ideas for publishing the first book as dark humour instead of the rather intense, polemic typescript they had originally submitted. They finally agreed for the text to be given to me (as a fellow Old Crafter) to ghost-write and Coarse Witchcraft: Craft Working was duly published – generally provoking more good natured laughter about British witchcraft at the time than we could have expected in our wildest dreams.

Even esoteric author and long-time chum, Alan Richardson, said of the book: ‘Coarse Witchcraft made me laugh out loud in more than a few places. In fact, I think it is the first book of its kind; although it pokes fun at modern excesses and can laugh at itself, it still manages to teach the real stuff at a very high level.’

There was almost enough material left from the first book to launch a second: Coarse Witchcraft 2: Carry On Crafting, with plans for a third. It was dedicated to all those Crafters who believe that reverence should be tempered with mirth and merriment – and was as equally well received as the first.

For reasons that will become apparent, the third (and last) title, Coarse Witchcraft 3: Cold Comfort Coven has been a long time in the writing. Despite the popularity of the first two books, the original authors decided to hand all copyright back to the ghost-writer who had created the series (if not the characters themselves), with the proviso that the real names of those people should never be revealed -and retire from the scene.

Cold Comfort Coven is written in the same vein as the previous titles, and in its own way continues the unexpected, but true, story of the Coven from the numerous notes supplied by, and lengthy conversations with, the original members. In its own way, I think the Coarse Witchcraft Trilogy represents a small but important capsule of Craft history during the 1980s, 1990s and 2000s that we have been lucky enough to preserve for the next generations of witches.

Excerpt from Coarse Witchcraft: Craft Working
St Thomas on the Poke is a small market town, as yet still unspoilt by the march of progress despite its close proximity to the south coast. And, despite an even closer proximity to the New Forest, the Coven lays no claim to any hereditary association with the legendary Dorothy Clutterbuck or the ‘New Forest Witches’. The Coven has been in existence for many years prior to the birth of its current members and will no doubt continue long after their deaths. Our family has farmed the land for centuries and, although that future can no longer be guaranteed, our branch of Old Craft will survive simply because we prefer to remain in the shadows and keep our teaching pure.

In spite of our ‘privacy’, our own small group is often beset with problems and difficulties of both a personal and magical nature, just the same as any other close grouping of people. Although head of the Coven, mine is not a blood-right. Three years after my mother’s death, father re-married; a year to the day his new wife was delivered of a son and promptly died. Some say the child was so ugly that the poor woman died of embarrassment. Be that as it may, as a result of this brief interlude, my father acquired a second son and a mother-in-law who was to be the bane of both his life and, subsequently, mine. Local people never understood why ’Squire (as my father was known) married Elizabeth Jay but I can now answer that question in all honesty, since it is no longer of importance. Like Jacquetta, the old Duchess of Bedford who snared Edward IV for her daughter, Granny Jay is a witch and, although she’s never actually admitted it, she used those powers to get Elizabeth into my father’s bed. In fact, Granny introduced most of the local children to the Old Ways (including my wife and myself), weeding out those who had a natural aptitude for careful nurturing when they came of reasonable age.

On my return from agricultural college following the unexpected death of my father, the old lady (whose personal habits and hygiene had always been questionable but now resembled those of an incontinent ferret) announced that I had been chosen to succeed the dead ‘Man’. Since Roger, my stepbrother, was of her blood, I felt the honour should go to him but Granny muttered that the boy was a moron who couldn’t find his own arse with a road map and a flash-light. She wasn’t, she added, having that sort of person messing up a hundred years of tradition. Despite her unprepossessing appearance, Granny was (and is still) not a force to be trifled with, as many of her neighbours have discovered to their cost. Mine was not to refuse.

Our Coven at present numbers the traditional thirteen although we have, in the past, had many more and often many less. Apart from my wife, Gabrielle, who serves as Dame and myself, there are our children, Richard and Philly, who are currently trekking around India during their gap year from university. (The Old Witch saw to it that they were introduced to the Old Ways at a very early age, even though I threatened to personally strangle her when I found out.) Guy and Gerry run the esoteric shop cum art gallery in the town centre and serve as our specialists in herb-lore. Priscilla and Adam at Bramble Cottage who, apart from keeping everyone supplied with honey and helping out with the livery stables, act as the Coven’s instructors. Then there’s Helena, our seer and diviner, whose jams and preserves are legendary within WI circles – but unlike Granny, hers is a tranquil madness.

Newcomers to the town, Madeleine and Robert were discovered like rare blossoms at a pub moot when Pris and Adam were forced to attend, due to Roger’s emergency hospitalization for haemorrhoids. (Granny unsympathetically observed that the doctors had obviously found a way to shut his mouth and give his arse a chance!) There’s Gordon, our stable ‘lad’ – an absolute marvel at animal healing and, finally, of course, there’s Granny herself.

Our real difficulties arise from Roger who, despite his grandmother’s unflattering pronouncement, formed his own coven in a neighbouring village. This means that Granny migrates between the two and although she disapproves of Roger’s modern approach (i.e. to let anyone and everyone ‘have a crack at the priesthood’) she spends most of her time with his group keeping an eye on things. ‘In case the daft bugger goes and kills somebody!’ The Old Witch also enjoys the atmosphere of seething hostility because Roger’s High Priestess is not his wife, and his wife disapproves of the one he’s chosen – for obvious reasons. Granny, of course, encourages Roger’s extra marital activities, and since Roger will roger anything with a pulse … well … the added spice (for Granny at least) is the fact that Roger’s brother-in-law is also the local vicar!

Although preferring to remain ‘private’, we do not work in isolation and are regularly in contact with other Old Crafters all over Britain. Because of my step-brother’s more liberal approach to craft-working on our doorstep, the members of the Coven felt that we should become more aware of what was going on in what is generally referred to as the ‘pagan scene’ at a more local level. Admittedly in doing so, we have added two new and valuable members to our group – so the effort was worthwhile.
Nevertheless, while we prefer not joining anything on a regular basis, we do make an effort to interact with the various goings-on in the area. This book is the result of the many conversations we’ve have, scenes we’ve witnessed, gossip we’ve exchanged and the experiences we’ve undergone, all in the name of Old Craft.

The names of the Coven members are those by which they have chosen to be known for the purpose of the book, for our true identities are no concern of anybody but our own. Neither will you find us in the telephone directory for we prefer not have our lives disrupted by the idly curious. Those who wish to have an understanding of our ways will seek us out when their time is right …


You can view The Coarse Witchcraft Trilogy on Amazon. The series is published by Moon Books