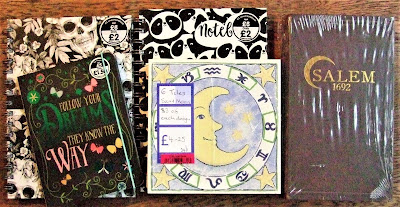 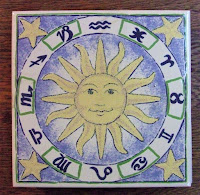 Instead of decluttering my witchy room - which is one of my resolutions for the year - I've bought some additions.

I went out yesterday with the intention of getting a book from the library for an essay I'm working on, and ended up buying some other lovely things from nearby shops.

First I bought three notebooks. When I spotted The Works is currently offering an extra 15% discount to students, I thought I'd stock up.

Then I popped into a charity shop and bought a set of six tiles with sun and moon patterns on them. I have an idea for a craft project using them and I'll blog more about that in future.

Finally I popped into my local boardgame cafe, Paradice in Bromley, where I saw a card game called Salem 1692, about historic witch hunts. Of course I had to buy it - and I'll be reviewing it after I've had a chance to play it.

I did also pick up my library book - The Collected Works of Edgar Allan Poe. I'm writing an essay on one of his tales set in London, 'The Man of the Crowd', for my MA course. The deadline is looming and I'd probably better get with that before playing games and starting craft projects...
Posted by Badwitch at 10:18