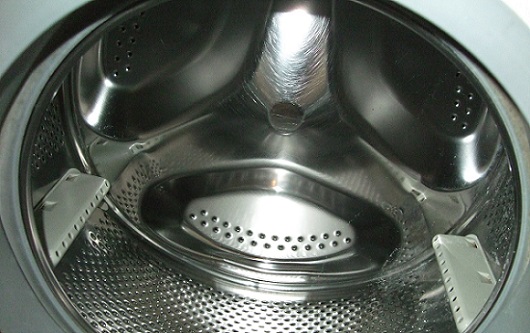 This is the inside of my washing machine. It might look shiny, but it isn't working. It stopped working on January 2. The earliest an engineer could get here was Wednesday just gone - January 9th. He was here for just 4 minutes and ordered a new part - which won't be available until next Wednesday.

So, having had a week without laundry already, I put my mound of dirty clothes into a large bag and took it to my local launderette. I hadn't used a public launderette for many years and I was expecting the experience to be awful - but I was very pleasantly surprised.

The launderette was clean and tidy, the manager was on hand to explain what to do, and my washing was fresh and dry in about an hour. But what really pleasantly surprised me was that the launderette was a great hub of local life. People were chatting and gossipping in a friendly way and were very welcoming to me, even though I was a newcomer to the laundry social scene.

The cost for using the washer, spinner and dryer was just £6. I also found time to pop to the supermarket over the road and pick up a few groceries. It honestly made me wonder whether it was worthwhile getting my washing machine fixed at all - I think I might save money overall by using the local launderette as well as make new friends.

When I first posted about my washing machine woes on Facebook, a friend who is in India laughed at me for complaining about my first world problems. He was right to do so. My issue is hardly a problem in the great scheme of things. I'm probably going to go back to the launderette with my sheets and towels this weekend - I'm almost looking forward to it.
Posted by Badwitch at 09:05

I love the tall tables to fold your clothes on.
Really saves your back.

Norm and Pearl - Thanks for the comments. Yes, I agree that more techno stuff means more problems, and yes, the tall tables to fold your clothes on are great.