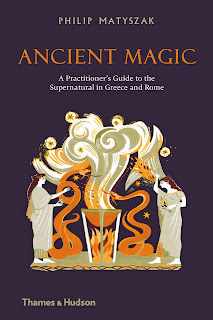 Here is an excerpt from a new book called Ancient Magic by Philip Matyszak, published by Thames and Hudson. This section is all about divination:

Looking to the Future
Now I am aware of no people, however refined and learned or however savage and ignorant, which does not think that signs are given of future events, and that certain persons can recognize those signs and foretell events before they occur.

In the past it was easier to tell the future. This is because, for the ancients, the future was as unchangeable as the past. What would be, would be. This is not to deny the existence of free will; it was just that people freely took the path leading to their preordained future. Humans can choose, but fate knows what their choice will be.

In Greek myth, the story of Oedipus illustrates this well. The child who was destined to kill his father and marry his mother would not have done any of those things were it not for the extreme measures that everyone voluntarily took to prevent it from happening. On learning the prophecy, the father ordered his baby son to be abandoned on a hillside. Instead, the baby was adopted by the king of Corinth. Unaware of who his real father was, Oedipus met and killed him in a quarrel. Later he married the widow. Had he known his true father from the start, Oedipus would probably have enjoyed a peaceful life– but there is no escape from destiny.

While a modern mechanical Nostradamus has to examine a multitude of probable futures to predict what is to come, the ancients worked with just one fixed future. This made things easier. If there was only one future that was going to happen, no matter what, then the only issue – albeit a big issue – was how to see it. Though difficult, the task was far from impossible. This is because although humans experience time as a sequence of events, the ancients believed that ex-humans (the spirits of the dead) and most divine beings instead saw time as a sort of large and complete flow-chart, on which the present was a moving dot.

Therefore, one way for a human to gain foreknowledge of the future was to talk to someone outside time who already knew that future. As we have seen, there are a variety of ways of getting in touch with such entities (though persuading these entities to be helpful presents an additional challenge). A second means was – and is – to get in touch with a living person with a talent for seeing ahead. The problem with this approach is that the only way of sorting out the fakers and charlatans from the real thing is to see if the predictions come true, and by then it is generally too late.

The third way was to cultivate such a talent yourself. For the ancients all the universe was a single, connected holistic entity. Today, a flurry of activity on social media and a liquor store preparing a large order are precursor events that lead inevitably to a party at Bill’s house that evening. In the same way, in ancient times, the movement of Mars into the house of Aries, combined with a flight of cranes going northwest to southeast meant that Licinia’s child would be a baby boy. Everything was connected. The issue was how to join the dots. The ancients developed a variety of means to predict the future, but note that while astrology is discussed here to some degree, the subject is as much modern magic (or ‘science’ to its many believers) as it is ancient magic. Although the methods of prediction have remained largely unchanged through the millennia, astrology is a thoroughly modern affair. When Instagram and Snapchat offer to send daily horoscopes to users’ smartphones, ‘ancient magic’ does not properly describe the topic.

The twelve astrological houses and their relationship to the planets and Olympian gods are so well known that almost every person in the modern West knows their birth sign and associated character traits. (‘I don’t believe in astrology, because we Scorpios are natural sceptics.’) The only major significant difference was that the ancients paid as much attention to the sign in the ascendant at their birth as they did to their sun sign. Thus the emperor Augustus, born in mid-September 63 bc, was by modern standards a Virgo, his sun sign, but he adopted as his symbol the Capricorn, his ascendant sign.

Those with an interest in this ancient but also very modern form of divination have an abundance of texts to choose from, most of which are directly or indirectly based on the Tetrabiblos of Claudius Ptolemy. This masterwork on the subject was written in ad 170, and has been regularly published ever since. Readers are recommended to the English translation by Frank Egleston Robbins in the Loeb Classical Library, which has Greek text and facing English translation. Beware of books that include ‘secret’ or ‘forbidden’ chapters of this work. These are modern inventions.

We leave astrology with the observation that astrology is further confirmation of the ancient belief that the future is unchanging. The movement of planets and constellations is not likely to change. Since these movements influence the people who live below those stars, it follows that their future is not going to change much either, a principle that underlies all forms of ancient divination.

Credit: This extract is taken from Ancient Magic by Philip Matyszak, published by Thames and Hudson

Link to buy the book via the publisher's website: https://thamesandhudson.com/ancient-magic-9780500052075