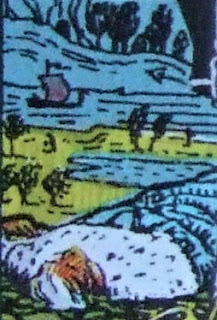 I have long loved ‘The Waste Land’ – TS Eliot’s 1922 poem about London as a doomed, ‘unreal’ city, populated by people who are dead, but do not realise it.

Yet one figure is certainly dead already – the drowned sailor who ‘Madame Sostris, famous clairvoyant’ places as the significator in a reading she gives ‘With a wicked pack of cards’. That image fascinates me most. But, before focusing on the drowned sailor, here is the full reading in the poem:


…Here, said she,
Is your card, the drowned Phoenician Sailor,
(Those are pearls that were his eyes. Look!)
Here is Belladonna, the Lady of the Rocks,
The lady of situations.
Here is the man with three staves, and here the Wheel,
And here is the one-eyed merchant, and this card,
Which is blank, is something he carries on his back,
Which I am forbidden to see. I do not find
The Hanged Man. Fear death by water.

Anyone familiar with Tarot will recognise that while some are recognisably traditional cards, others aren’t. Eliot himself noted: ‘I am not familiar with the exact constitution of the Tarot…from which I have obviously departed to suit my own convenience.’ The sailor, as Eliot pointed out, is important because he appears later in the poem:


Phlebas the Phoenician, a fortnight dead,
Forgot the cry of gulls, and the deep sea swell

Was the ‘drowned Phoenician Sailor’ just a made-up card of convenience? From the poem’s description, ‘Those are pearls that were his eyes’, we can imagine it shows bones undergoing ‘a sea-change. Into something rich and strange.’ That’s a quote from The Tempest, which is where Eliot got the line about pearly eyes. It implies metamorphosis.

Some commentators, including Robert Currie and Gertrude Moakley, have suggested the Ten of Swords is the card most similar in meaning. The suit is about conflict, pain and destruction and the ten card represents that at its strongest. In the 1910 Rider Tarot Cards - the deck Eliot probably saw - it shows someone lying dead, run through with swords. Yet, in the distant sky, a new dawn breaks. The worst is over, but it is not the end of the story; likewise, for the sailor’s metamorphosing.

Although a drowned sailor is different from Rider deck artist Pamela Colman Smith’s illustration, the Minor Arcana was earlier depicted with just numbers of cups, swords, pentacles and staves. Many modern decks follow her style, but there’s room for flexibility. I’ve blogged in the past about whether some Tarot decks are more genuine than others – even if Eliot was envisaging a picture different from Smith’s version, that doesn’t mean it wouldn’t be a valid card.

The drowning image could place the sailor in the suit of cups, which relates to the element of water and emotional change. The Five of Cups is about grief following loss. Smith depicted someone mourning three spilt cups, with two full cups unseen behind them. The card shows that while grief is natural and should be allowed its course, to move on we need to recognise what treasures we still have. It is about emotional transformation. 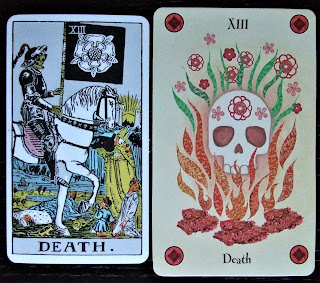 However, along with Betsey B Creekmore, in an essay ‘The Tarot Fortune in The Waste Land’, I think the ‘drowned Phoenician Sailor’ can be seen in Smith’s Major Arcana Death card (pictured left), which is also about transformation and about accepting death as a part of the cycle of life. I’ve blogged more about that here. Smith's main image is a skeleton riding a pale horse but, as Creekmore writes, it shows ‘a dead man lying by an ocean; a ship stylised in the manner in which a Phoenician bark might be rendered.’ (see top detail)

Nowadays, of course, there are many Tarot decks with varying imagery. Some, like The Crystal Tarot, depict Death as a skull undergoing transformation (pictured above). The focus is on death as part of the cycle of life. Things die, their bodies rot, but flowers later bloom from them – an idea used in other parts of ‘The Waste Land’:


‘That corpse you planted last year in your garden,
‘Has it begun to sprout? Will it bloom this year?

Yet ‘The Waste Land’ implies the cycle of life continuing is part of the problem. New flowers blooming ‘out of the dead land’ make us cling to memories and stay rooted in the past. What is needed is spiritual and emotional transformation. Only after we acknowledge the lessons of the long dark night of the soul, when all seems lost, can a new day dawn that will let us move on.

Perhaps that divinatory message, now as much as in 1922, is something Londoners really need to think about…
Posted by Badwitch at 08:00

I really enjoyed your post. I arrived here through a search on "shipwrecked sailor" because "shipwrecked or drowned sailor" is the title of A. E. Waite's Hanged Man in his later Fellowship of the Rosy Cross and his mystical tarot. The reference is to OSIRIS who was called the drowned sailor as well as at least two references in the Bible that are believed to have come from an connection between Christ and the martyred Osiris. Eliot could have become aware of this through Charles Williams. I'm presenting this at a tarot conference in a couple of days.

Oh how fascinating! Can you give me the details of the tarot conference? If it is online, I would love to hear your talk