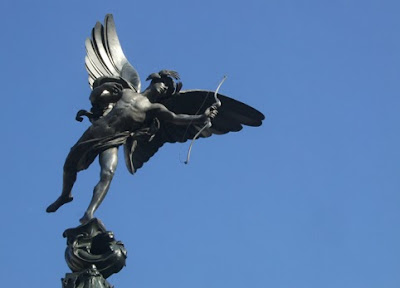 These days most Londoners are aware that the scantily-clad, winged god with a bow and arrow in Piccadilly Circus isn't meant to be Eros, the Greek God of Desire. The statue was designed to be Anteros, God of Selfless Love - associated with charity rather than sex. It was created to commemorate the good works of 19th-century philanthropist the 7th Earl of Shaftesbury.

Apparently English people struggled with the concept of there being many different types of love, so the statue's nickname of the more famous Eros stuck. However, with Valentine's Day coming up, I thought it was a good time to remember that love isn't just about passion.

For many people, Valentine's Day is tough. If you have recently gone through a break-up or your partner has died, it is one of the toughest days of the year. If one of your friends or relatives has gone through divorce or bereavement, you could show your love for them by phoning them up and asking how they are doing. Maybe pop round for a visit or see if they want to go for coffee and a chat.

In ancient pagan times, Socrates saw the exercise of platonic love as being one step on the ladder to contemplating divinity. So by showing your love for a friend you could also be notching up an extra spirituality point, if you choose to think of it in that way.

You could also follow the example originally intended by the Shaftesbury Memorial statue and do something for charity. You could donate money to a good cause or food to a food-bank or have a clothes clear-out and give your unwanted items to a charity shop.

However, it is also worth considering that Anteros, brother of Eros, was also the God of reciprocated love. If someone loves you, don't take them for granted. Be considerate, listen to what they have to say and try to resolve any disagreements by talking them through. Valentine's Day might be too commercialised, but you don't have to buy someone a huge present or take them out for an over-priced meal to show them you love them. Small acts of consideration and kindness show love more than anything else.