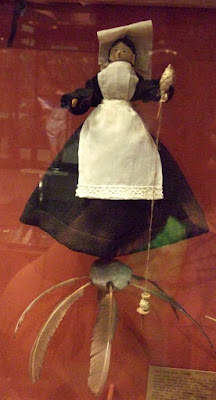 The curious little doll in the picture to the right relates to folklore for the season of Lent, which starts this Wednesday, March 6, and runs up to Easter on 21 April.

It is in the Pitt Rivers Museum, in Oxford, which describes the figure of a woman as a 'Quaresima (lent doll), hung up in houses and hotels in Southern Italy.'

Lent dolls are traditionally made in Spain as well as Italy. They could be stuffed with an orange, lemon or potato, and then had 40 feathers stuck in them. The would be hung up in houses and young family members would pluck one feather each day, like an Easter version of an advent calender.

The book Italian-American Folklore, by Frances M. Malpezzi, suggests that only four feathers would be attached to the doll, perhaps like the four candles traditionally burnt each Sunday over advent:


Some Italian Americans preserved the Old World custom of personifying Lent as an old woman represented as a doll made from a potato decorated with feathers and cloth. Each week the children of the household would remove a feather from the doll until by the time Easter came it was totally denuded. Then the doll was burned.

It seems this doll, and another without feathers that is also in the Pitt Rivers, had a lucky escape from the fire.

I wish I had known this bit of doll-and-potato folklore when I earlier blogged about spud-related spells. If you know anything more about Lent dolls, do leave a comment.

You can view the book Italian-American Folklore on Amazon, and also view on Amazon my own book: Pagan Portals - Poppets and Magical Dolls, which has lots of information about the history of magical dolls, seasonal doll folklore and various methods of how to make poppets. It is published by Moon Books.