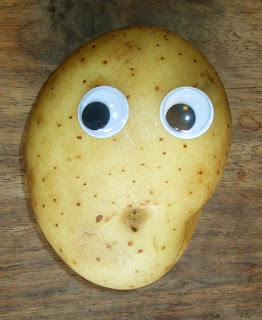 Have you seen that weird music video of a girl singing the praises of a potato? I noticed several people share it this morning and it reminded me of a strange dream I had while I was writing my book on poppets and magical dolls.

I dreamt I was asked by the BBC at very short notice to talk for 5 minutes about magic. I said okay, thinking I could talk about magic until the cows came home without any problem.

Then, just before I was on air, the producer handed me a potato and said I was to talk about the magic of the spud.

I was very nearly flummoxed.

You see, there's a little potato-related folk magic that's been passed down in my family for countless generations. If you suffer leg cramps in the night, put a potato in the bed. I do recommend cleaning the dirt off it first, but otherwise just use any ordinary spud.

I have no idea why, but it has always seemed to me to make a difference. I've even suggested it to friends - who were usually highly skeptical, but later reported improved sleeping. (I should add the words of caution that this is not medical advice and you should always consult your GP if you are unwell.)

But, in my dream, to my dismay I saw I still had a couple of minutes left to talk. Five minutes seems a very long time when you are on air.  Luckily the thought came into my head to talk about how you can carve a spud into a little figure and make a poppet out of it. I demonstrated how easy potatoes are to carve - and to stick pins in if you want to. I was floundering a bit, but I just made it.

Then I woke up. 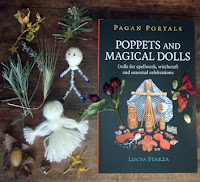 However, the dream did prompt me to do more research into the potato. I learnt that it is in the same family as a whole heap of magical plants, including mandrake, belladonna and datura.

Potatoes made it into my book, along with other roots and fruits, as ways of making poppets. Here's a peak:


Pretty much everyone, witch or not, has heard of the mandrake root being the perfect ingredient for creating a homunculus. Homunculi are more magical creatures than dolls, but roots that naturally look a bit like a person can be used for making poppets. I wouldn’t recommend mandrake roots for beginners though as they are hard to grow and poisonous, even if they don’t scream so loud they kill anyone who is listening when they are pulled from the ground, despite what folklore says. ...There are plenty of other roots you can use. ...You can easily carve a potato into a face or stick things to it for features and feet. Like mandrake and various other magical plants, potatoes are in the Solanaceae family, so have some of the same magical properties without being dangerous. In a similar way you can use hard fruit such as apples and pears, while pumpkins and gourds can be carved into faces for more than just Halloween lanterns.


Another bit of magical trivia I was recently reminded of is that in Terry Pratchett's Discworld novels, the wizard Rincewind said he preferred potatoes to sex...

My book, Pagan Portals - Poppets and Magical Dolls, is officially published in August, but the very first copies will go on sale this weekend at Treadwell's Bookshop in London. On July 14 I will be teaching a workshop on poppet-making. After that, I will be in the shop signing copies of the book and chatting to anyone who wants to pop in and say hello. You can find out more about the workshop and book signing here: https://www.treadwells-london.com/event/

You can view the book at publisher Moon Books’ website:https://www.johnhuntpublishing.com/moon-books/our-books/pagan-portals-poppets-magical-dolls

16:09
Ooooo well I will never think of a spud the same way again. Lovely post look forward to your book coming out, shame I don't live nearer to London but sounds fun.p.s having Internet gremlins so hope this posts ok.