Book Extract: Natural Tides in the Dictionary of Magic 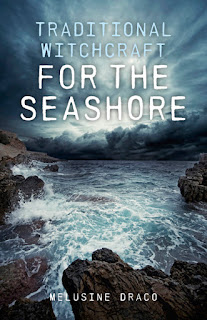 Here's another excerpt from a useful reference book for witchdes - one of the 26 articles in The Dictionary of Magic and Mystery, compiled by Melusine Draco for Moon Books. It is all about the power of the tides, which Melusine Draco knows a lot about as she is also the author of Traditional Witchcraft for the Seashore.

Natural Tides
Since the beginning of time, when man first stood on the shoreline and wondered at the vastness of the ocean, it has been recognized that the periodic rise and fall of great stretches of water had something to do with the moon. Nowhere else on earth was Nature’s power and glory so much in evidence. The tides are due to the moon’s gravitational pull on the water, lifting it to form a bulge resembling enormous wave-crests: one on the side of the earth facing the moon, and the other on the earth’s far side, for there the moon’s pull draws the earth away from the water. The friction between the water and the rotating earth slows the movement of these bulges, and for this reason high tide, as the bulge is called, does not occur exactly when the moon is overhead, but somewhat later.

The sun’s gravitational pull raises similar tides, but less powerful than those caused by the moon. At full and new moon, when the sun and moon are in a straight line with the earth, they produce an especially powerful spring tide. This has nothing to do with the season: spring tides occur throughout the year. This means that we need to tear ourselves away from the stereotypical moon goddess concept and think in terms of the natural interaction of the Sun and Moon, moving in a cosmic rhythm of perpetual motion. Some may be reluctant to accept this idea but it is a scientific fact that, despite its impressive gravitational pull, the moon is a dead, barren place, reflecting the sun’s light, not its own.

Although the ancients had no scientific understanding, this is what is known magically as ‘old wisdom’ – the true interpretation recorded in folklore and logged into our collective subconscious – not the modern ‘fake-lore’ currently in vogue. Without coming to grips with this ancient knowledge, our own modern magic will be stunted.

So, let us return to the sea… in mid ocean, the tides are simply a rhythmic rise and fall of the water. On the continental shelf, they act like the waves on a beach, and become a bodily rush of the water towards or away from the land, producing the tide’s ebb and flow, and in between, when the tide is almost at a standstill, there are brief periods of slack water. This rise and fall takes place twice every day and the sea witch recognizes the importance of knowing about them from both a magical and safety point of view.

Recent research has revealed more evidence of the effects of these earth-tides: parts of western Britain and Ireland, for example, ‘bounce’ by four inches and that the movement is caused as tides ebb and flow twice daily! Again, we have scientific proof of cosmic influences on the earth on which we stand, so magical working can be timed to coincide with these natural movements for greater effect.
Magical synchronicity is the secret key-word.

You can view The Dictionary of Magic and Mystery on Amazon and also view Traditional Witchcraft for the Seashore on Amazon.