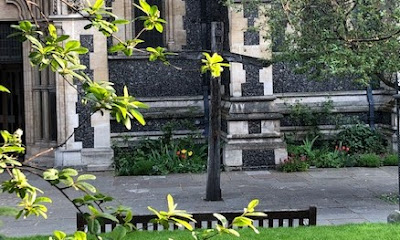 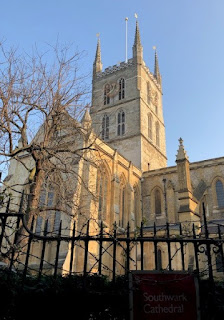 One of my resolutions this year was to blog about the Gods and Goddesses of London. Being a pagan, I have so far written about many pagan deities whose presence can be felt or seen in the city, including Isis, Brigid, Mithras and many more.

Today I am blogging about Jesus and sharing these pictures of London's Southwark Cathedral. You might wonder why a pagan is writing about a Christian God, but I respect all deities of the world. The message Jesus brought is as valid today as ever: that love is better than hate; that we should try to forgive; and to consider our own faults before throwing (hopefully metaphorical) stones at others.

And Southwark Cathedral is a holy place that has welcomed pagans within its doors. Back in 2010 I saw The Southwark Mysteries performed there. This modern version of medieval mystery plays retells sacred stories in a way that is relevant for our time.

It was penned by visionary poet John Constable. In 1996 his shamanic double, John Crow, received a vision in which the Goose, a Southwark spirit, revealed the hidden history of the prostitutes and down-and-outs who lived outside the law in the Bankside Liberty of the Clink. These prostitutes were known as Winchester Geese, because the brothels they worked in were owned by the Bishop of Winchester. John says that the Goose also revealed a lost paupers' graveyard - Cross Bones. This was later unearthed during work on the Jubilee Line Extension and is now a memorial garden where vigils are held on the 23rd of each month.

Archaeologists have also found the remains of pagan temples in the vicinity of Southwark Cathedral. The cathedral website has an online exhibition where you can see some of the artifacts, including statues of a hunter god and a household 'Genius'. Here's the link: https://cathedral.southwark.anglican.org/visiting/exhibitions/romano-southwark-online-exhibition/

So, this Easter, I am writing about Jesus as a London God, that many of London's sacred sites are both Christian and Pagan, and about the shared message of helping those in need.

You can view The Southwark Mysteries on Amazon.