Here's my write-up of the first day of the Museum of Witchcraft and Magic's annual conference last weekend. The title was Betwixt and Between: Isobel Gowdie, the Witch of Auldearn, and it ran alongside the exhibition of the same name, which is on until October.

Isobel Gowdie is famous for her descriptions of 17th century witchcraft and fairy beliefs, given in 1662 as confessions to the ministers of Auldearn and Nairn. She talked of transforming into animals, cursing her enemies and damaging crops as well as feasting with fairies. However, apart from her confessions, very little is known about her. Questions remain as to whether she was a fantasist or an imaginative storyteller, or whether her words offer a genuine insight into real witchcraft practices. The conference itself reflected that by offering a programme that was a mixture of presentations about fact, fiction and magic itself.

The first speaker was Zoe Mitchell, who is a poet and the author of the book Hag. Her talk was called A Deed Without a Name: Witchcraft in Modern Poetry and the Role of the Witch in Creative Practice.

Zoe said: 'Poetry gives us a way of exploring the humanity [of witches] among the magic.'

She pointed out that history is made up of real people who were like us. Through poetry we can explore the legends and myths about them and invent new mythologies. She said: 'Words themselves are powerful [like spells]. That idea is seductive to a poet.'

Dr Maureen James, author of Lincolnshire Folk Tales, related a series of folk stories about witches and wise women from Lincolnshire. One of these was the tale of a man who was out shooting with a friend. The friend borrowed his gun and shot a hare in the leg. When the man got home he discovered that his mother had suddenly developed a pain in her own leg. A visit to a cunning man revealed that his mother was in fact a witch who had transformed herself into the very hare that was shot.

There are many folk tales of witches turning into hares, and this is reflected in Isobel Gowdie's chant to shape-shift to a hare:


I shall go into a hare,
With sorrow and sych and meickle care;
And I shall go in the Devil’s name,
Ay while I come home again. 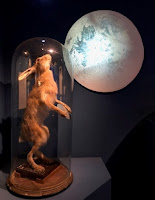 The exhibition includes a display of a hare against the moon. The hare was found dead beside the road by a magician and preserved using taxidermy. He would then place it in moonlight as part of his magical workings.

Frances Bihet, who is a PhD student from the University of Chichester, with Zoe Mitchell, gave a talk about late Victorian folklore studies and fairy lore. She explained how, during that era, popular beliefs about fairies changed from fearing them to regarding them as harmless and relegating them to children's books.

Apparently this was partly to do with folklorists of the time wanting to be regarded as scientific. The main turning point was the illustrated book of children's poems, In Fairyland: A Series of Pictures from the Elf-world by Richard Doyle and William Allingham, published in 1870.

Heather Freeman, professor of art and digital media at the University of North Carolina looked at the similarity between the way bots are used today in social media and the way witches were supposed to use familiar spirits. In both cases, people send them out into the world to do their business, with some autonomy, and often that business is mischief.

Dr John Callow gave the first talk of the conference that was specifically about the history of Isobel Gowdie. I had already heard him about her at the Haunted Landscape conference in London in 2017 and you can read my write-up of that here. He also devotes a chapter to Isobel Gowdie in Embracing the Darkness, which is a brilliant book about witchcraft beliefs and culture.

Melissa Seims then spoke about painter and witch John Upton. His work was posthumously published by the Hellfire Club as Confessions of Isobel Gowdie. I had never heard of John Upton before, but was fascinated by the images Melissa showed and her description of his life as a self-taught artist and part of the vibrant magical scene in Brighton in the mid to late 20th century.

The first day of the conference ended with some practical magic. Judith Noble is head of academic research at Plymouth College of Art, but instead of offering an academic lecture, she invited the audience to participate in a knitting spell to curse the patriarchy. The idea is that you concentrate on the spell's wording while doing the knitting, then burn it. There is an example of the spell in the museum's collection.

Later this week I will blog about day two of the conference. The Betwixt and Between: Isobel Gowdie, the Witch of Auldearn exhibition is on at the Museum of Witchcraft and Magic, Boscastle, Cornwall. Entry is with a museum ticket.