Pagan Eye: A Magical Spell on the Millennium Bridge? 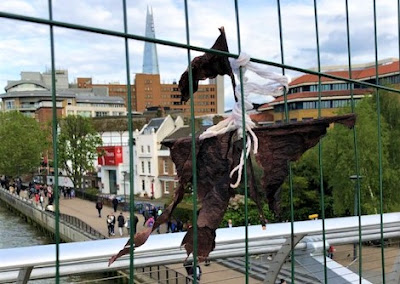 I was sent this photograph of an object on London's Millennium Bridge, with the Shard in the background.

The person who sent it said  it was one of a pair of almost identical sets of twigs wrapped in black cloth and tied to the bridge in cross shapes. They wondered if they were poppets, or effigies used for magical workings.

Poppets don't have to be realistic (in fact, they are often quite stylised), but it is hard to tell if these are meant to represent human figures or not. Poppets can use used to represent a person in spellwork.

Tying one to a bridge over water could indicate a desire to move on, to make a new start or to overcome obstacles. Bridges also symbolise a person passing into the Otherworld, and the term "crossing over" is often used as a euphemism for death.

Crossed sticks could represent a Christian cross, but not necessarily. Crosses are found in many traditions all over the world. In traditional English magic, rowan sticks tied into a cross shape are used for protection, but they are usually tied with red thread rather than black cloth and white string.  The colour black can represent cleansing, banishing, mourning or work with spirits.

The sticks tied with string and cloth also remind me a bit of of a shamble - a type of spell devised by Terry Pratchett for his fantasy books, but inspired by traditional English magic.

You can find out more about poppets in my book Pagan Portals - Poppets and Magical Dolls, viewable on Amazon.