This post was written by Adele Butler for A Bad Witch's Blog. It is about items she saw when she visited York Castle Museum. 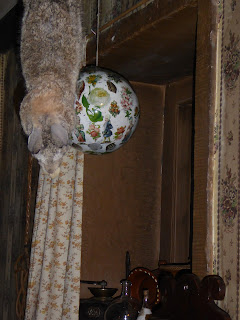 Ceramic Victorian Witch Ball
This item (to the left) appears in a Victorian montage dated to 1872 and the witch ball was mentioned in the description of the décor as a fashionable item of the day.

One appeared at auction on Google called a Victorian decalcomania internally decorated glass “witch ball”. One similar to the York example, called a free-blown glass potichomania-decorated witch ball, was advertised in an auction.


"In the early 18th century, watch balls became popular features in nurseries with the name later evolving into witch’s balls.

"These pretty toys were hung up in nurseries to catch a child’s eye. These were called ‘watch balls’ and were possibly intended for the protection of children from malevolent spirits.

"With time, their name was corrupted into witch ball. This caused immediate association of these toys with superstitions of witches and evil eye."

The witch’s ball in the HES collection originally belonged to two sisters, Jane and Louisa Macdonald, of Arbroath, who helped to establish a local history museum in the Abbot’s House at Arbroath Abbey. Last December, experts at HES were able to establish the date of the object for the first time by analysing the glass.

Ms Montani said an “important breakthrough” was made in understanding the witch’s ball and its use.

Dr Maureen Young and Aurélie Turmel, who work within the HES science team, used a portable X-ray fluorescence spectrometer to test the chemical composition of the object.  A peak in the presence of arsenic suggested the object may have dated to 1835-1870. However, the high level of pigmentation additives such as chromium, iron and copper strongly points to the 20th century as possible date of production.

During the Victorian era, the ball may have been placed at the front of the house to see calling visitors or used in the dining room to help the service, Ms Montani said. However, she added: “Objects of this kind show superstitions of witches and evil eye were very much alive in the Victorian period. Witch’s balls had a steady market, being manufactured in many different sizes."

I was surprised and interested to learn that these decorative ceramic balls were actually a desirable item in the Victorian home – also that they were thought to derive from the term “watch ball”.
My understanding formerly was that witch balls had once been the glass floats from fishermen’s nets that the superstitious adopted. 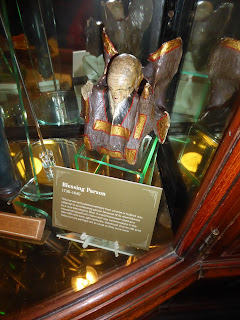 The Blessing Parson
There were two of these in a glass case and this was a photo of one of them. They were prevalent from 1730 – 1840 and were made from the vertebrae of a bullock or horse and were kept in the house as a good luck charm.

Now I have never come across these before. According to an article on the York Museums website:


"Made of a horse or bullock vertebra, a Blessing Parson was a painted bone ornament. In the past, many people believed that certain objects such as these would help protect them from evil. Superstitions and good luck charms were prevalent in rural Yorkshire and took a variety of forms. Many superstitions are still believed today while others have long been forgotten. Dr Kirk collected a variety of talismans that were an important part of rural life in Yorkshire."

The photos and text are copyright Adele Butler
Posted by Badwitch at 08:00