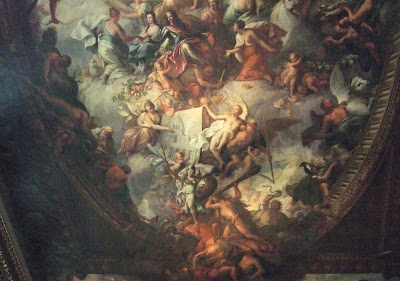 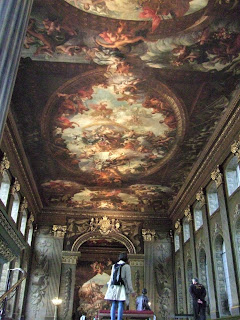 Eighteenth century art was full of the Gods and Goddesses of ancient Rome, and one of the finest examples is the Painted Ceiling at the Old Royal Naval College in Greenwich. It might seem odd that a Christian country would use Pagan imagery, but harking back to Classical times was fashionable during the Enlightenment.

Artist Sir James Thornhill, who painted the hall between 1707 and 1726, depicted about 200 figures on the walls and ceilings. They are a mixture of allegorical, mythological, historical and contemporary characters. Deities, signs of the zodiac, depictions of the four winds and other mythological beings are used to symbolise natural forces and abstract concepts. They are intended to tell a story of political change and human achievements. Any religious message was the triumph of Protestantism over Catholicism, rather than anything intentionally Pagan.

Just a few of the Pagan Gods and Goddesses to look out for on the walls and ceiling are Apollo, Athena, Bacchus, Demeter, Iris, Juno and Neptune. James Thornhill created a tour guide called An Explanation of the Painting. In it, he explains what the historical and mythological figures mean. You can buy facsimiles of his original guide at the ORNC or online. Modern visitors can also make use of an audioguide that explains the history of the Painted Hall and highlights various characters on the ceiling and what they represent. 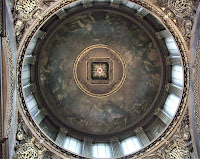 Even if eighteenth century England wasn't a Pagan country, the fashion for classical mythology was influential in the start of the Pagan Revival. Even today, many atheist or agnostic Pagans regard deities as symbols and archetypes rather than living entities - not too different from the way some of our ancestors would have done in the 1700s.

The Painted Hall reopened in March this year, following a conservation project. I popped in to have a look at it yesterday, before a tutorial at the university. I took advantage of a scheme on the first Wednesday of each month when you can get in for free if you show a Lotto ticket for the day, or you can pay a donation of as much as you choose. The normal ticket price is £12 for adults and £8.50 for concessions. My Lotto ticket didn't have any winning numbers, but getting to see the Painted Ceiling for £2 was enough of a win for me. 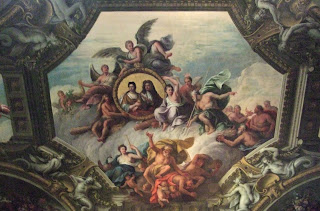