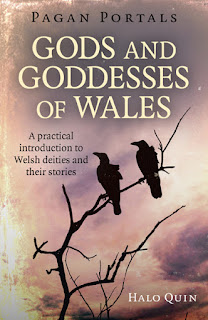 When I was new to Paganism, one thing that puzzled me was how people chose what God or Goddess to honour. Yes, I knew Pagans didn't have to pick just one deity, but I wanted a God or Goddess to focus on and to build a relationship with.

Over the years, I've heard many others ask the same question, and my answer to them is what I was told. Think about what ancient myth or legend you are most drawn to. Is there a God or Goddess in that story? If so, that could possibly be the one to connect with.

Pagan Portals - Gods and Goddesses of Wales is a new book by Halo Quin that offers an introduction to the deities of Wales through the traditional myths of that Celtic land.

The book is aimed at Pagan seekers and offers both a retelling of the main tales from Welsh mythology and practical exercises to work with Welsh Gods and Goddesses. The book starts with suggestions of ways to honour them, including creating altars and shrines, making offerings and saying prayers, and possibly going on pilgrimages to sacred sites. The next chapters cover the tales themselves, followed by details of what the deities might represent, suggestions for offerings, and guided visions.


"Written by a practising witch, living in the heart of Wales and working with the deities woven into the land, this book contains the major stories and backgrounds for the Gods and Goddesses of the heartland of the Druids. Within its pages you will find information on the major deities and where their stories can be found, alongside suggestions on how to connect with them and weave relationships with them into a modern pagan practice."

If you are looking for some guidance about what Pagan deity to honour, and feel a connection with Wales, its history and legends, I can recommend this Pagan Portals book. It is a delightful read as well as offering excellent guidance.

You can view Gods and Goddesses of Wales on Amazon.