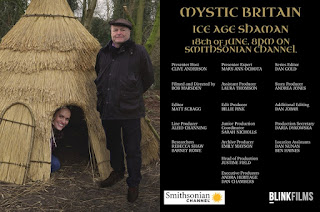 Until now, I managed to completely miss a series called Mystic Britain on the Smithsonian Channel, although it has been available in the UK since earlier this year. The next episode going out is called Ice Age Shaman and is on TV tonight, Tuesday 18 June, at 8pm.

I was alerted to it by my fellow Moon Books author Imelda Almqvist, who is appearing on tonight's show. In this episode, presenter Clive Anderson looks at the world 10,000 years ago, before the dawn of civilisation. Mary-Ann Ochota shows how our ancient ancestors were sophisticated hunters, craftsmen and shamans.

Imelda said: "I am the shamanic practitioner who models a Stone Age antlered head dress from a museum in York - and then takes Clive on a time travel adventure to Neolithic times..."

She added: "Life is never dull in this house! My children were hiding upstairs when the film crew was here, for fear of 'accidentally appearing on TV'!"

I am also going to have to find out if the earlier episodes of Mystic Britain are available to watch online. One of the first ones was apparently on witches.

Imelda is the author of Natural Born Shamans and Sacred Art: A Hollow Bone for Spirit. You can view her author page on Amazon.

Like you I somehow seem to have missed this thank you for posting this .
Norm.