The Moon & Odd Lunar Effects: What Do You Think? 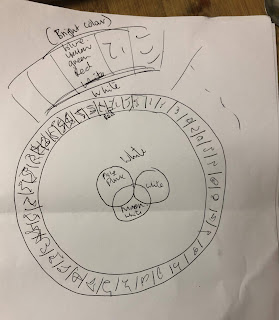 Kate Fowler, from Dorset, sent me this diagram she had drawn of how the moon appeared when she saw it from her garden last night.

She described it as "unique" and said: "What I saw was the moon with a rainbow ..... but with code circle outside the moon with 2 addition moons inside..... I didn’t take a photo, but I memorised what I saw and drew what I see. It’s hard to describe but I’m gonna show you what I drew and hope you will help me with the answer.

Well, I don't know exactly what caused the effects, but I have some ideas. Rings around the moon are rare, but I have seen one myself in the past and posted a photograph of one taken by James Wallace. You can see that here. It is also possible to get moonbows, which are pretty much like rainbows seen in sunlight, but much rarer and fainter. Here's a link to the Wikipedia entry.

I'm not quite sure what the triple moon that Kate saw was, but it might have been the planets Saturn and Jupiter, which appeared close to the moon last night. Here's a link about that.

If you look at the moon tonight from moonrise onwards in the UK, you might see another odd lunar effect as there is an eclipse, or a blood moon, which will peak at about 10.30 British Summer Time. Here's a link to an article about the eclipse.

Sadly I did not see the Moon last night, but must say that for some time now my Son and I have discussed how the full Moon looks strange, with colours we had not noticed before, we wondered sadly were we seeing it through a haze of pollution.
Norm.

I'm sure pollution plays a part. I did see the moon last night, through the trees, and it was lovely. I didn't notice any moonbows though :(

Sounds like a moondog. We see them quite frequently in Alaska.
https://www.universetoday.com/99511/the-secrets-of-moondogs/

Thanks Pearl, I think you are probably right!

You're welcome! I love heavenly phenomenon. When I lived in Hawaii I saw moonbows all the time when the moon was full.