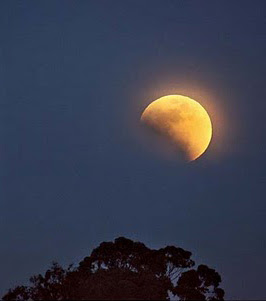 Tonight there is a total lunar eclipse - and it could mean trouble on the way...

The full moon will rise eclipsed at 9.14pm and last for over three and a half hours, ending at 11.45pm, according to the 2011 Astro Diary. One of the things that is quite rare about this eclipse is that the moon will passes right across the centre of the Earth's shadow - making it long and dark.

When a lunar eclipse happens, the Earth casts a shadow over the moon, turning it red and giving it the name Blood Moon. On this particular eclipse, I think that name could be particularly apt. Not only will it be a long, total eclipse seen from many places in the world and, I suspect, will look particularly reddish in colour, but many astrologers are saying that this eclipse could be a sign of particularly difficult and stressful times, when conflict is used to settle disputes rather than peaceful discussion.

I'm not an astrologer, but I have a feeling the astrologers may be right. A lunar eclipse can often be a time of change, when previously hidden feelings come to the fore and unforeseen revelations can take place; when emotions run deep and life changes can take place. This time, I suspect there could be some sudden shocks - even dramatic or seemingly disastrous events.

But I also believe that things will work out for the best in the long run. Sometimes a shock can prompt us to take necessary action before it is too late. Even disasters can bring about profound changes to the way we do things, ultimately making things better than they were before or at least preventing the same catastrophe from happening again - although it might not seem like it at the start.

On a personal level, I have a suspicion any unwanted wake-up call brought by the lunar eclipse could be job related. My firm is currently undergoing a restructuring and things are not being handled in the most sympathetic of fashions. I can see there could be some bitter battles to fight before a fair outcome is reached.

I think many other people are - or will be - facing similar situations. So take care today - and look forward to happier omens in the future.

The picture above was taken by James C Wallace II. I previously used it for a Pagan Eye post http://www.badwitch.co.uk/2010/08/pagan-eye-beautiful-moon-iii.html last August.

I think I could not consider myself lucky even if its visible here, duh its cloudy. Yah, so much for the excitement. I hope someone could get a video out of this one. buy aion accounts

it's not my work, but here's your video!

Oddly enough, shit hit the fan in my social sphere totally unexpectedly yesterday, right about the time of the eclipse. Psh, I look away from my forecasts for a few days and look what happens... lol.

James C Wallace II - Thanks very much for that link! It was great to see the eclipse in action as the sky was cloudy in London that evening and I couldn't see it then.

Pallas Renatus - Sorry to hear you had a social upset, but thanks for the comment.