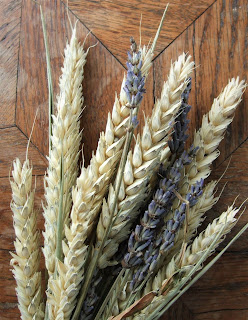 As today is August 1 and festival of the start of the harvest, here is an excerpt from Crone! - An Old Craft Witch's Year, by Melusine Draco. This section is about Lammas and Lughnasadh. I will be posting another excerpt about traditional August and harvest lore in the next week or so.

August: Yellow Glints the Harvest
Under the summer sun the mountains change colour and the guests start to arrive, which means outings and eating out in favourite places. One of the most popular of our days out is a trip to Cahir Castle – one of the largest castles in Ireland on an island in the River Suir. The 13th century castle was sited near an earlier native fortification known as a cathair (stone fort), which gave its name to the place. During a visit one of the Coven Elders and I were strolling by the river discussing certain developments that were in the offing and, as if in answer to our questions, a heron that had been perched on the castle ramparts flew off. Instead of flying over the bridge, the heron flew into one of the darkened arches and out the other side to perch on the edge of the weir – and provided an answer to our dilemma. An Old Craft witch needs to be on her contacts at all times or the message could have been overlooked.

Lammas is a most important Old Craft festival and if we study the amount of folklore attached to corn, bread and the harvest we can see why there are all the rural superstitions about corn-dollies, the last stook to be cut, and the Harvest Supper. Originally it was held on 1st August, or about halfway between the Summer Solstice and Autumn Equinox. Lughnasadh is the Gaelic equivalent marking the beginning of the harvest season (not just one day) and was widely observed throughout Ireland, Scotland and the Isle of Man, corresponding to other European harvest festivals such as the Welsh Gŵyl Awst and the English Lammas.

Lughnasadh is mentioned in some of the earliest Irish literature and has pagan origins, being named after the god Lugh. Much of the activities would have taken place on top of hills and mountains and involved great gatherings that included religious ceremonies, ritual athletic contests (most notably the Tailteann Games), feasting, match-making, trading and visits to holy wells. Evidence shows that the rites included an offering of the ‘first fruits’ – a feast of the new food, of bilberries, the sacrifice of a bull, and a ritual dance-play in which Lugh seizes the harvest for mankind and defeats the powers of blight. The naming also demonstrates why there are the differences in labeling the various festivals in the pagan calendar – since it depends on whether the group’s roots are Gaelic, Brythonic, Norse or Anglo-Saxon …

Tadhg’s Journal comments that it’s good to celebrate the time with a loaf of bread – home-baked or perhaps, something special bought from a local shop. “Maybe eat this special bread after your main meal one evening, with lashings of butter on it, and eat slowly, savouring each bite as an act of deep meditation, deep reverence and with deep thanks-giving. Rituals don’t have to be lavish and complicated. Simple ones, with intentionality go a long way. Why not invite family and friends along?”

Spell-Casting and Divination
It is believed to be unlucky to turn a loaf upside down, after helping oneself from it. If you turn a loaf of bread the wrong way you will turn someone out of the house, or bring ill luck.

The Witch’s Loaf Spell
Traditional witches are honour-bound by the ‘breaking of bread’ and the ill-wishing of anyone breaking that trust can be reversed by placing the offender’s name skewered with a rusty pin or nail, inside a new loaf. The loaf can then be fed to carrion birds (making sure they cannot injure themselves on the nail); or burned in a very hot oven making sure it is placed upside down.

Crone! by Melusine Draco is published by Ignotus Press UK and available direct from the printer as a special price. You can also view Crone! on Amazon.