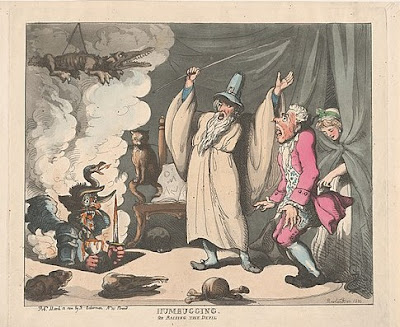 I was really lucky to get a ticket to hear historian Thomas Waters talking about Cursed Britain at London Fortean Society last week, as tickets sold out fast. His look at the history of witchcraft and black magic in modern times was fascinating. It was based on the meticulous research behind his new book, gathered over 15 years of academic work.

Thomas started by saying that witchcraft has been important in Britain throughout the 18th, 19th and 20th centuries, and is growing in popularity now. His particular focus is the dark side of witchcraft, rather than modern pagan practices. He said that, generally, an investigation into cursing by witchcraft starts with the victim - the person who believes they are cursed. The witch hunters - whether they are cunning folk or others offering a witch-busting service - come in later.

It usually begins with someone having a tough time. Perhaps they lose their job, then their partner might fall ill and other misfortunes follow. They can't earn money; doctors can't find a cure; nothing goes right for them. It is quite possible that the person didn't believe in witchcraft until bad things started to happen to them, but mundane solutions fail.

Then, someone suggests they might be cursed. This puts the idea in their heads and they start to look for a possible curser - and a healer. Belief is the most important part - believing that you have been cursed, and that you can be cured. It is possibly the power of the placebo effect, which continues to be a controversial subject. Belief that a cure will work can help it along the way. Also, belief that you have been cursed can actually make you feel ill. In 1942 an American doctor coined the term 'Voodoo Death' for the idea that believing you were cursed could damage your health.

Thomas Rowlandson's cartoon (pictured at the top), dates from the early 19th century and is a satire on cunning men of the era. It shows someone getting scammed. People who believe they have been cursed are at risk of being scammed out of their money by charlatans.

Suspected witches have also been attacked in England in recent centuries. In the Suffolk village of Wickham Skeith, in the early 1800s, a poor man called Isaac Stebbings was persecuted by local residents because they believed he was a witch. He voluntarily agreed to be swum - thrown into a pond to see if he sunk or floated - with the idea that if he sunk he was innocent. The entire village, accompanied by a local policeman, watched the affair. Sadly, he floated, despite spending hours in the water and being close to death. The local parson rescued him, but Isaac continued to be persecuted by villagers for years.

After the 1830s, the police became more professional and sought to bring the force of the law against both witch persecutors and those who offered magical services. The reason for the decline of magic from the mid 1800s to the mid 20th century is more because the police made efforts to arrest people doing it, than because of an increase in scientific thought or rationality. Polls since the 1950s show an increasing belief in the supernatural.

Thomas ended his talk by saying that the re-enchantment of the world is happening. He asked: "What should we do about it?"

You can view Cursed Britain by Thomas Waters on Amazon. He is also giving other talks in London.

On Thursday 3 October, he is giving a lecture entitled Warlocks, Grey-witches, and Cunning-women at Treadwell's Bookshop, 33 Store Street, Bloomsbury London, WC1E 7BS. Tickets are £10. You can book online at https://www.treadwells-london.com/

On Wednesday 23 October; he is repeating his Cursed Britain talk with London Fortean Society at Conway Hall, 25 Red Lion Square, London WC1R 4RL. Tickets are £6. You can find the details here: http://forteanlondon.blogspot.com/

The top picture shows Humbugging, or Raising the Devil by Thomas Rowlandson. It is shared under Creative Commons via the Metropolitan Museum of Art.