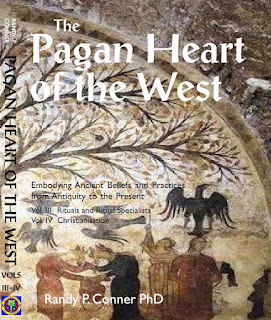 Here is an extract from the latest volumes of Pagan Heart of the West, by Randy P.Conner. In these third and fourth volumes, Pagan Heart focuses on ritual specialists, including shamans and witches during the time of Christianisation. Like the earlier volumes, this aims to show paganism has persisted over the course of millennia, and undergone metamorphosis and innovation.

Dame Alice Kyteler: an excerpt from The Pagan Heart of the West by Randy P. Conner, Ph.D.s
In 1324, the first women tried for witchcraft in Ireland included Dame Alice Kyteler and her domestic and assistant Petronilla de Meath. The trial took place in spite of much protest, due in large part to the efforts of a zealous – I do not believe “fanatic” would be too harsh a description – Franciscan friar, Richard Ledred, who had in 1318 been made Bishop of Ossory. If we can trust statements made at the trial – and that is very frequently an enormous “IF” – it would appear that Kyteler was a wealthy, vengeful woman who practiced both beneficent and sinister forms of magic, including amatory magic and the cursing of enemies, including male partners of whom she wished to rid herself. Alleged material evidence of these practices included a collection of herbs, ointments, powders, candles, and human and animal parts. She was said to have sacrificed cocks and other animals at crossroads near Kilkenny. Several women and men, including her son William Outlawe, were said to be her assistants in sacrifices and works of magic. She was believed to be instructed in magic by a decidedly non-Christian otherworldly being named Robin Artisson and by three African (“Ethiopian”) men bearing iron rods.

In this light, we know that in the mid-third century CE, a unit of Roman soldiers comprised of Africans, the Numerus Maurorum Aurelianorum, was “stationed at the Roman military garrison at Burgh-by-Sands (ancient Aballava/Aballaba, “place of apple trees”) at the western end of Hadrian’s Wall in Cumbria,” northwest England. These soldiers, probably numbering around five hundred, included dark-skinned “Ethiopians,” probably from Nubia, and most probably also men from what is now Algeria, Tunisia, and Morocco.

Archaeologist Richard Benjamin suggests that the “Moorish” soldiers moved freely within the environs of northern England, that they “would have had plenty of money to spend in native settlements,” and that they probably “sought entertainment in brothels.” Moreover, evidence suggests that a number of these men, desiring “more permanent relationships,” “settled in Britain.” From the High Middle Ages (roughly, 1000-1300 CE) onward, the presence of both free and captive Africans and persons possessing African heritage grew increasingly noticeable in Germany, Italy, England, France, and elsewhere in Europe.

Vikings called Africa “Blueland,” and they deemed the men they captured or hired the “blue men,” with “blue men” being variously given as blámaðr, bla-maors, blámenn, blaumen, bloman, and ultimately in English, as both “blackamoor” and “blueman.” It’s significant that they gave a different name to Iberia and much of North Africa, that of Serkland. The term blár typically connotes a “very dark blue-black colour.” In Gaelic they were described as fear gorma, fir goma, and na fir ghorma. All of these terms referenced, among other things, the color of their skin. As inhabitants of Ireland, the Africans came to be called the “blue men of Erin.” In the Annals of Ireland, we find: “[T]hese are the blue men [of Erin], for Mauri is the same as black men, and Mauritania is the same as blackness. …Long indeed were these blue men in Erin.”

African males, particularly those identified as “Moors,” were often associated with magic and sorcery or witchcraft during the Middle Ages and Renaissance and into the seventeenth century, whether or not they were actually practicing such. Many witch trials record statements of black-skinned males taking a leading role in gatherings or “sabbats” or else describe practitioners as “black” men. Many, many times we find statements like: “Jehanneta Relescee of Freiburg (Swiss) in 1493 confesses under torture. Says her husband beat her continually. She went to a rock in a forest and called on God or the Devil to help her. A dark man appeared and promised relief.”

Robin Artisson may have been synonymous with Robin Goodfellow, or Puck. This spirit sometimes took the form of “a Negro. [As such,] Alice received him as her incubus and allowed him to copulate with her. In return, he gave her wealth.” It is significant that in 1584, Reginald Scot, in The Discoverie of Witchcraft, connects Robin Goodfellow to a horned being having “skin like a Niger.” (I wonder how many Wiccans and others [are prepared to] think of the Robin Goodfellow/Puck or the Horned God as Black?)

It is also significant that the term “Aethiopis” is used in this context. This term refers primarily to an “Ethiopian,” that is, to someone from Africa. Moreover, as Nathan Stewart Rosenstein and Robert Morstein-Marx point out in A Companion to the Roman Republic (2006), “Aithiops [Greek; Latin, Aethiops] …became [in the Roman Empire] the conventional designation for a black man…The description itself,” they add, “carried no negative connotation.” This term persisted into the Middle Ages and Renaissance. Other terms for dark-skinned persons of African heritage included Açopart (Medieval French), Aufricans (Medieval French), blacche (Old English), cil d’Etiope (Medieval French; later, Éthiopien), Moor (or Moor, Middle English; Moir, Late Medieval Scottish), Saracen (Middle English; Sarrasin, Medieval French), and Sowdonesse (i.e., “Sultana,” Middle English). Although most of these terms spoke to Muslim affiliation, all signified dark or black skin and African heritage.

“Robert” and “Robin,” as derived from rb, may connote “black (including black skin),” as well as “someone who instructs an initiate in becoming a priest.” The surname “Artisson” appears to be derived from “Arthur,” Welsh arðu, which means “very black” or “the Black one,” with du signifying “black” and connoting a raven. Robin Artisson was said to carry an iron staff, which may indicate an association with Africa. He was said to be accompanied by two other black men (or otherwise to appear in triadic form) who also carried iron staffs that appeared to serve as magic wands. The term deployed to describe these men is again “Aethiopium,” again referring to Africans. Robin and the “Ethiopians” carrying iron staffs allegedly taught Kyteler the practice of sorcery.

Ironworking probably originated in Africa. It was an industry linked to the sacred, and it emerged in Mediterranean and other European, especially Germanic, cultures, as an industry associated with magic with the smith, as we have seen, coming to be seen as a kind of priestly artisan, often in association with dwarves. Iron staffs were, and are, sacred implements in numerous African religions/traditions, significantly, among practitioners of Vodun and of the Yorùbá religion of West Africa. Within the former, the sacred iron staff is called osun ematon, is topped by an iron bird, and is carried by an obo, a traditional healer, diviner, and worker of magic. Within the latter, the iron staff is called the osun, is likewise topped by iron birds and carried by ritual specialists who practice healing, divination, and magic, and is a sacred attribute of several orishás: Osanyin, god of herbal medicine; Orunmila, god of divination; Orishá Oko, god of farming; Ochossi, god of hunting; Ogún, god of battle; and Osú, god of the household. It is most often associated with Osanyin. In the seventeenth century, alleged Scottish witches Alexander Hamilton and Agnes Clarkson also described Black males holding staffs or wands; while Helen Guthrie described the Devil as a “black, iron hewed man.”

Kyteler was also said to have sacrificed animals at crossroads, a practice common to Africans, ancient Greeks, Indians, Arabs (before Islam), and others, a practice also undertaken in Haitian Vodou and New Orleans’ Voodoo. As Newbell Niles Puckett pointed out many years ago, there is a Yorùbá saying, “The junction of the road does not dread sacrifice.” More specifically, Kyteler was said to have sacrificed nine red cocks and nine peacocks’ eyes at the crossroads. In terms of Yorùbá orishás, the red rooster belongs to Ogún, the god of war, while the peacock (òkín in Yorùbá) belongs to Oshún, the goddess of intimate relationships. It is possible that these animals bear other significant correspondences in other African traditions. Kyteler’s alleged use of a dead criminal’s skull in magical practice is also a significant element in both European witchcraft and African-based magic. In sum, Lady Alice’s practices strongly suggest that she may have come into contact with Africans, the so-called “blue men of Erin.”

Kyteler was condemned as belonging to the company of sortilegam, magam, haereticam, et relapsam (“sorcerers, magicians/witches, heretics, and apostates”). She was not, however, executed. Her assistant Petronilla was, on the other hand, not so fortunate. Her sacrifices and works of magic recall ancient Egyptian, Greek, and Roman pagan, as well as African, practices; whereas her master, Robin Artisson, indicates pagan innovation, that is, a post-Christianization pagan spirit.

You can view Pagan Heart of the West on Amazon. The author is Dr Randy P. Conner and it is published by Mandrake of Oxford.