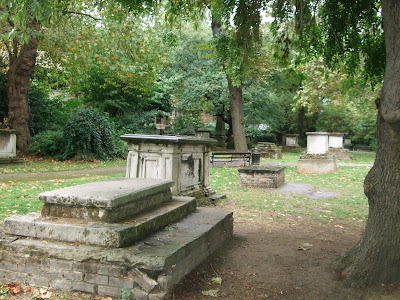 This is the site in London where a grave-robber first stole a body for medical experiments, back in 1777. Nowadays, it is a quiet, little-known London park, tucked away behind the Foundling Museum, but St George's Gardens still contains the tombs from its former days as a churchyard burial ground. 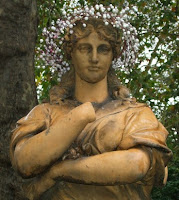 St George's Gardens is also a stopping point on Minimum Labyrinth's Pantheon of Pancras tour. As well as old graves, it contains a statue of Euterpe, the muse of lyric poetry. In the photo to the right, you can she has a crown of flowers and is regularly honoured there.

The gardens are listed as now being one of London's most tranquil places, in Quiet London: Quiet Corners, by Siobhan Wall. There was, apparently, much controversy about the hallowed graveyard being taken over as a public park, back in 1884. And, while it is a peaceful place to spend time on a sunny afternoon, as the light fades in autumn twilight, it is less easy to be sure that the dead lie so peacefully in their disconnected graves.

You can find St George's Gardens in Bloomsbury, WC1, with entrances in Handel Street and Heathcote Street.

Before Samhain - or Halloween - for several years I've been posting a series of photos of London's burial grounds under the title London Necropolis - a Necropolis being a city of the dead. I've blogged about London's "Magnificent Seven" Victorian cemeteries and about some of the less-well-known ones, including St Pancras Old Church, The Cafe in the Crypt and Bunhill. I'll be blogging about others too.