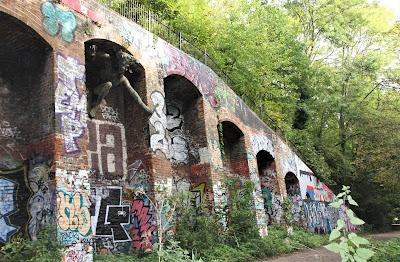 The Parkland Walk, along an abandoned railway line between Finsbury Park and Alexandra Palace, seems like a setting for some tale of urban folk horror. Do not be surprised if you spot a figure from fairy lore emerging from graffiti-covered, crumbling station arches. Don't worry too much. It is likely to only be the Crouch End Spriggan. 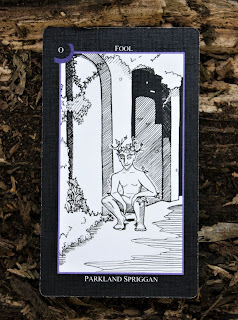 While the spriggan in my photos above and below is a giant sized sculpture by artist Marilyn Collins, local legends say it was inspired by tales of  a ghostly goat-man, which haunted the walk in the 1970s and 1980s. Children would dare each other to walk the trail from the Crouch End Hill bridge to the Crouch Hill bridge on dark autumn evenings. It was also children who suggested the spriggan as the subject for what was intended to be a series of sculptures along the walk, but only this one was completed, in 1993.

The area has possibly caught the imaginations of horror writers, although no definite links have been proven. Stephen King wrote a short story called Crouch End, published in 1980, which may have been inspired by the eerie Parkland Walk. The Fuller Memorandum, which is part of the Lovecraftian Laundry series of novels by Charles Stross, has a character attacked by a monster while cycling along an abandoned railway track trail.

Parkland's Spriggan also appears as the very first card in the London Lore Tarot, representing the Fool. The book that comes with the set says:


Tricksters and thieves, spriggans are the faeries found guarding old British ruins and barrows. Though they're small, it's sometimes said they are the ghosts of dead giants.

The walk itself is London's longest local nature reserve. You can spot rare wildflowers, birds and natural creatures along the way, as well as - perhaps - the odd creature of legend. The trail is open at all times, so you could even venture along it on a dark autumn evening, if you dare...

You can find out more about the Parkland Walk at the Haringey Council website. You can buy copies of the London Lore Tarot at Treadwell's Bookshop in London. 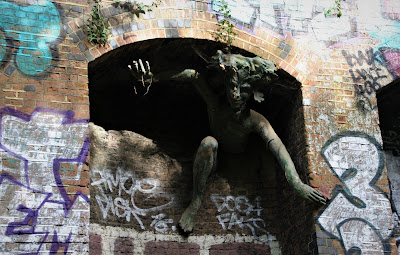 Thank you so much for sharing great information about this mysterious place. I'm going back to London in January, and will try to visit the Scriggan. I've been a long-time reader of your blog, and a huge fan! Please keep it up. <3