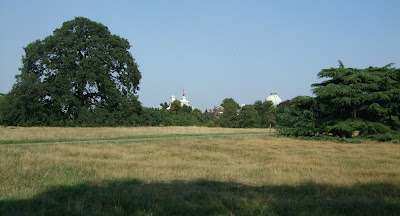 Greenwich Park, is the site of an Anglo-Saxon barrow cemetery. It isn't well signposted and there isn't a lot to see except some vague mounds in the ground and rough grass. I *think* I found the right spot and took the photo above when I was in the park in the summer, when I also photographed the site of a Romano-Celtic temple there.

This is one of the largest Anglo-Saxon barrow cemeteries in England and dates back to the 6th or 7th century. It is almost certainly pagan. The area was excavated in the 18th century, when beads, wool, hair, shields and swords were found. These grave goods suggest that those who were buried there were pagan, not Christian. You can find out more on the Greenwich Parks website.

Before Samhain - or Halloween - for the past few years I've been posting photos of London's burial grounds in a series I've called London Necropolis - a Necropolis being a city of the dead. You can see links to some of those posts below.