Bettany Hughes on Helen of Troy and Mighty Aphrodite 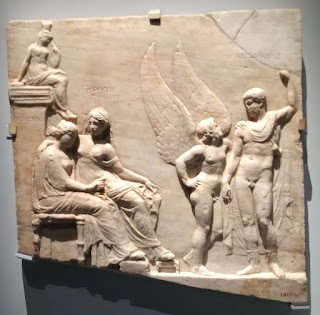 After visiting the Troy exhibition at the British Museum on Friday I went to hear historian and broadcaster Bettany Hughes give a talk about Helen of Troy and Aphrodite. The lecture marked the opening of the new exhibition as well as the release of Bettany's new book, Venus and Aphrodite: History of a Goddess.

Helen and Aphrodite are interlinked. Across three millennia, both have been both idealised as symbols of beauty and demonised as reminders of the terrible power beauty can wield. Bettany's talk was about both of their stories. However, in this blog post I am mainly going to cover what Bettany said about Helen, because I'll be reviewing her new book within the next week or so. That is all about the goddess of love.

Bettany started her talk by saying that the big question is not about who Helen is, but what she means and why she matters. When Bettany was filming a documentary about the Trojan wars, modern-day Romany travellers, who were camped in the region of where Troy has been discovered, remembered Helen but not the heroes Achilles or Hector.

There is a carving in the British Museum showing the conception of Helen. It depicts her mother, Leda, having sex with Zeus in the form of a swan. Bettany said it is both a beautiful and a troubling image. This image was popular in the ancient world and tells us two things that make Helen special: she is half divine, but she is also involved in trouble.

Later, Aphrodite offers Helen to Prince Paris to influence his judgement of which goddess is the most beautiful. Images on pots from the ancient world often show Helen as a willing accomplice. She is often depicted wearing purple, which was both the colour of royalty, but also associated with prostitutes.

Whether the cause of the Trojan war was Helen or Aphrodite mattered to the Greeks, but the message was that desire can lead you to do good things or bad things. Sappho tells us in her poetry that Helen was led away by desire.

Most images of Helen show her abduction or rape. She is a woman taken by force. She is also described as the most beautiful woman in the world, which has given artists trouble when painting her. She is described as having terrible beauty, with a power to make men do things they shouldn't.

Helen was worshipped by women of Sparta as a mythical figure and a nature goddess. They honoured her with races and gymnastics and made sacrifice to her. To them, she was more than just a pretty face. Helen was also worshipped in Egypt and in Troy. In Troy she was Helen the Destroyer.

In the 19th century, Evelyn de Morgan painted Helen in a chocolate box type way. Bettany said that we should banish that image from our minds and think more about ways she was depicted in ancient Troy, with a white face, red cheeks and dark eyes that show how powerful she really is.

As well as writing about Venus and Aphrodite, Bettany's earlier books include Helen of Troy: Goddess, Princess, Whore.

You can view Venus and Aphrodite on Amazon and also view Helen of Troy on Amazon.

Pictures: Roman depiction of Helen being coaxed by Aphrodite, Helen of Troy in a 1898 painting by Evelyn De Morgan, book cover.

Thank you for posting this , it's so interesting . Bettany Hughes is such a wonderful historian .
Norm.