Book Excerpt: Descent - Wheel of the Year Book One 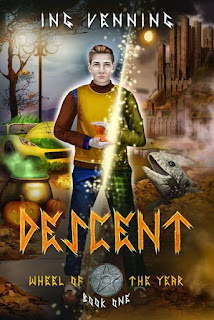 Here is an extract from a pagan fantasy novel, Descent - Wheel of the Year Book One, by indie author Ing Venning. The book is about four teenagers who struggle with their identities as pagans in a small, fundamentalist Christian-dominated Arkansas town in the 2006. They discover a fantasy world they can only visit during the spokes of the Wheel of the Year, but discover pagans have it even tougher there than on Earth.

Descent Excerpt
Traveler made a strangled sound as his eyes swept toward the castle's entrance.

Three bent figures were gathered near the archway. There was an older man, a young man with a shaved head and dark skin, and a middle-aged woman bound in stocks, the devices forcing them to bow. A man in a black hood stood over them with a whip. They were all bleeding - some of the blood running down into small grates that seemed to have been built for this purpose.

A man with white hair and a scratchy-looking salt-and-pepper beard was walking around the three victims nonchalantly. He wore plate armor that made his gait stiff. A gray cloak fluttered out behind him. It bore a fist and upright spear that waved in the light breeze. There were torches set at intervals in a wide oval around the people in the stocks. They seemed to define the perimeter of the man's steps.

"That's Digory Damon." Traveler used the muttering of the people outside the torchlit circle to cover his own words.

Damon began to speak. The man sighed a lot. Every sentence seemed rife with little down-turning noises in his throat. If they had expected a commanding voice, or even expected him to yell, they were disappointed. His nasal, sighing tone was almost inaudible above the murmuring of the crowd. Until, realizing their leader had begun to speak, the townsfolk hushed themselves.

"Aaaaahhhh... Do you admit yet to the heresy you have (aah) committed? Do you yet see the true light of the (aah) one true God who will have no other before Him?" It was asked in a conversational tone, as if the man were inquiring if anyone wanted more coffee.

The bald teenager raised his head as far as he could and spat.

Damon sighed again and raised his hand, signaling the man with the whip, who held his weapon high and slapped it across the boy's back with a whistle and a crack. The youth groaned, but he didn't cry out.

Traveler held his fist over his mouth and moaned into it. "He's my brother - well, my adopted brother. Cad Makram took me in when I was but two or three. And Nick when he was still a baby. I've seen the older two in town - brother and sister. Felix is their family name, I think. Good people."

Damon had resumed his lecture. "And what will it take (aaahh) to convince you of your folly? I am willing (aaaah) to be reasonable, but those who defy the Lord our God must be (aah)... properly motivated." And he raised and lowered his hand again. This time the woman took the lash, opening up a gash in both her dirty gray shirt and her back. She did scream, and the tortured sound reverberated against the castle walls. The sound of the lash seemed to echo on and on across their nerve endings until they found it nearly impossible not to cry out in sympathetic torment.

Such a different world! But was it? Was this a horrible vision of Earth’s past - or its future? Or both? Wendy considered.

River held his hands over his face and moaned softly to himself.

Ivy was holding Traveler back now, her hands on his wrists, whispering, "You'll just get us all killed if you rush in."

If you'd like to read this entire novel (the first in a nine-book series) for free, just visit Ing's website: https://ingvenning.com/
Posted by Badwitch at 08:00